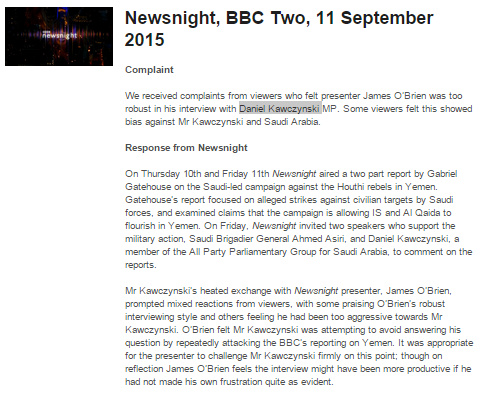 That's all very well from James O'Brien, admitting that he didn't get it quite right, and it's true that the BBC got complaints and plaudits for the interview (as we said at the time)...

...but that's only half the story and this Newsnight reply seems disingenuous.

My impression on watching it (very much confirmed by re-watching it) wasn't that James O'Brien was spontaneously making his own frustration felt at Mr Kawczynski's refusal to answer his questions. Instead he aggressively charged at Mr Kawczynski as soon as he'd given his first answer - and did so with what sounded like a pre-prepared pro-Newsnight attack/defence.

Unlike most passing readers of that BBC Complaints post (I suspect), I was aware that Mr Kawczynski was only on the programme because he'd got into a prolonged Twitter spat that day with Newsnight editor Ian Katz over BBC bias - the outcome of which was that Ian Katz invited Daniel Kawczynski onto the programme that night, it might have been presumed to continue their discussion on air, with JO'B acting as His Master's (Ian Katz's) Voice. Given what actually happened though, JO'B seemed intent on crushing the MP's complaint (and the MP) live on air, right from the very start.

So when Mr Kawczynski duly appeared James O'Brien responded to his first comment (accusing the BBC of bias) by charging at Mr Kawczynski, delivering a robust editorial completely dismissing the MP's concerns about BBC bias and then, instead of allowing him to respond, simply repeating his own question and refusing to allow Mr Kawczynski to counter his own pro-Newsnight rant by repeatedly accusing the MP of not answering his question.

That's what was particularly inappropriate there (in my opinion) and the BBC's response glossed over it.
Posted by Craig at 13:50