"What sense do you have, Nick, of public opinion in Hungary regarding this issue?" 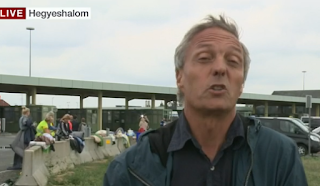 The BBC's Central Europe correspondent Nick Thorpe has been making a lot of appearances on the BBC in recent days and, as we've noted before, he's not exactly been shy of expressing an opinion or two of his own along the way.

Here's a transcription of an answer he gave to a question on the News Channel at 14:05 today. The question was. "What sense do you have, Nick, of public opinion in Hungary regarding this issue?". His answer ran as follows:

I think they're split, like in other countries in Europe. Hungarians are no harder-hearted I think than anyone else in Europe.

Many people have been showing enormous sympathy. On the hard-shoulder of the motorway yesterday evening, late at night, people were parking their cars on the side of the road, risking some danger themselves, to bring food, to bring water, to bring comfort to those people. In the railway stations we've seen the efforts of the different migration aid organisations here to help them.

Parallel to that, there is a hostility among some [emphasis Nick Thorpe's] Hungarians to them. The government publicity has not helped that. I think it's whipped up a certain degree of xenophobia here. There's a fear, a general fear in the population that these migrants may be bringing infectious, diseases, that there may be terrorists disguised among them. This has been very much what we've heard from the pro-government, pro-Fidesz media in the country.

So a mixture of views, dividing families and dividing society at large.

It's clear from that where Nick Thorpe stands on the migrant crisis (not on the side of the "harder-hearted types") and where he stands on the Hungarian government's behaviour. Impartial, it isn't.

Nor does his reporting seem to be particularly accurate either.

Checking the internet, I'm guessing he was completely winging it here, merely going off his own anecdotal 'evidence'.

He doesn't appear to have looked at the opinion polls, one of the most recent of which showed that 66% of Hungarians believe that "refugees pose a danger" while just 19% said it is Hungary's "duty" to help.

That's hardly the kind of split he was implying.
Posted by Craig at 14:55