Complaints about the objectivity of BBC reporters seem to be getting through to them - if Today chief correspondent Matthew Price's latest online piece is anything to go by.

It contains the following passage: 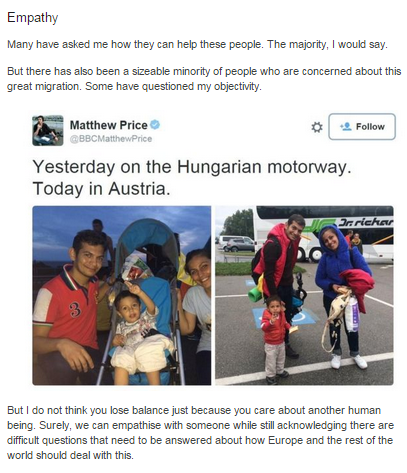 I think that some of the questioning of BBC reporters concerns (a) their overwhelming focus on unrepresenative migrants/refugees - i.e women and children - and (b) their apparently completely trusting/unquestioning attitudes to any migrant/refugee whose story they broadcast.

The first of those criticisms is something else Matthew Price appears to have picked up on. He ends this piece by citing the story of a young male migrant (i.e. someone who is representative of the vast bulk of young, male migrants/refugees travelling up through Europe at the moment):

His telling of that young man's story, however, doesn't dispel the second concern. The man's story seems to have been accepted at face value by the BBC reporter. Is the story true? Is he really from Syria? Does he really mean to go back to Syria one day? Does Matthew Price know?
Posted by Craig at 13:55