The Plot against Britain

Before Craig’s latest post I was about to say “it’s been fifteen hours and ten days since our last post about Jeremy Corbyn.” Never mind, I can’t say that now, but nevertheless it’s high time for another one.

Websites everywhere have unearthed one incriminating example of Corbyn’s friendships and affiliations after another, but nothing seems to dent the ardour of his followers.

Several days ago Sarah AB posted “A Corbyn Catch up”, on Harry’s Place, a round-up of important Corbynalia that had come to light at that time.
There was Tony Blair’s second attempt at being ignored by those who hate him, an interview with the Oz LaRouche cult, something to do with antisemitism from Stockport’s boy wonder and pieces by Bob from Brockley, Louise Mensch, Nick Cohen, Hugo Rifkind - but hey,  you don’t want to read lists.
You’re incredulous that no friendship, however unwholesome - no unfortunate utterance or short-tempered reposte, no memory lapse, no imaginative treatment of the truth, no ridiculous rationalisation of any of a cluster of damning revelations can put a Corbynite off its hero.

Corbynites are steadfast and true and oblivious to all the above. According to the BBC and the Telegraph the fever has spread to France.

An intriguing toilet-wall graffiti in rural France comes to mind’; it went:  “Fuck off, la France”. Imagine that.

Since that ‘round-up’ article was posted a further avalanche of Corbyn-related pieces have appeared on  websites, blogs and in the media. Sky hosted a hustings debate , after which a poll found that Corby won - by 80 somethings! The audience literally bounced up and down in their seats the minute he uttered any utterance.
Some have been amusing themselves imagining the line-up of Jeremy Corbyn’s new (shadow) cabinet. One appointment they seem to have overlooked is Gerald Kauffman as foreign secretary (to scotch all those pesky rumours about Corbyn’s antisemitism)

People are speculating about what will happen. Wouldn’t it be funny if the polls were wrong? Not funny ‘amusing’ but funny peculiar. What if he doesn’t win? Not everybody thinks he will. If he doesn’t win I imagine the mob will be lobbying for another contest immédiatement. 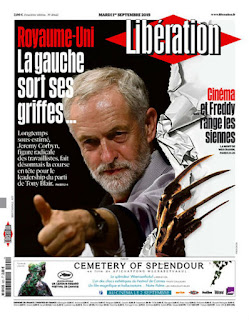 The whole phenomenon is deeply ominous. I’m re-reading Philip Roth’s The Plot Against America.  If you haven’t read it here’s an excerpt from a review by Paul Berman:

“Fascism took over most of continental Europe during those years, and this event was terrifying not just for the obvious reasons but also because every country in Europe seemed to have generated a fascist movement of its own, drawing on national idiosyncrasies and charming folk costumes -- such that, after a while, the very existence of local traditions and funny hats came to seem positively sinister. In America, European-style fascist movements, the imitators of Hitler and Mussolini, were already marching around the streets. [...] But the genuinely scary prospect in America was a fascism that might draw on something more than immigrant peculiarities -- a fascism thriving on the "patriot" legacies of the American Revolution and the cornball kitsch of surly folk cultures from this or that region of the country. A fascism in red, white and blue. That was Lewis's fear, and West's. And it is Roth's.

Of course you have to substitute the particulars - geography and ideology - but the parallels are too close for comfort.
Corbyn is no aviator, in fact no hero of any kind. His appeal is solely because he hasn’t ever been constrained by the conventions of two-party politics,  which means he can talk ‘straight’, nor has he had the responsibility of front bench office, so he feels free to make the unrealistic promise of more material goodies for all. No more austerity!  Should he gain power those attributes will automatically evaporate. Eventually Britain and its inherent qualities will implode, and what might be lost in the process is unthinkable.

One can only hope the ‘sensible’ politicians stand firm and/or the general public comes to its senses before it’s too late.
Posted by sue at 11:29