I could write reams about Jeremy Corbyn. His policies, his principles, his hypocrisy, his persona.  His cringe-inducing speech with those awful straw-man jokes and that conspiratorial gesture - a kind of wink and a nod, which he must have thought was endearing (it wasn’t) -  its rambling, unfocused, populist motherhood-and-apple-pie platitudinous vacuousness, much of which turned out to be, in any case, plagiarised. 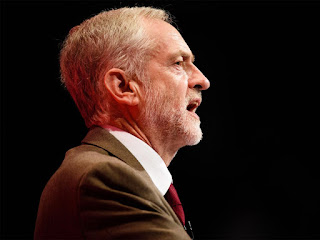 Corbyn’s challenge to David Cameron over Ali Mohammed al-Nimr, a protester who faces the death penalty in Saudi Arabia for a crime he allegedly committed aged 17 was all well and good, but next minute he’s congratulating President Obama for making this atrocious deal with the Ayatollahs, whose human rights record is equally terrible, even if we don’t know the actual names of the individuals hanged from cranes.

I don’t even like those over-sized jackets that people wear to make make them look vulnerable.  To me they just look stupid.
There. I’ve got that off my chest. Now for the criticism. 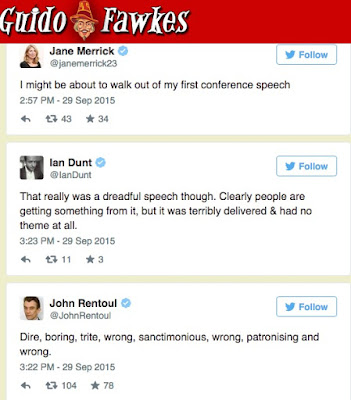 “Jeremy Corbyn was the star of the show at the Labour Friends of Palestine fringe last night. Speaking on a panel organised by the group yesterday was Husam Zomlot, a former PLO ambassador to Britain. Zomlot has some rather eccentric views, to put it kindly, judging by this BBC interview from last year”

As well as attending Labour Friends of Palestine he fulfilled his duty as leader of the Labour party by putting in an appearance at  Labour Friends Of Israel.
Having spun his fondness for mingling with terrorists and holocaust deniers as “for peaceful purposes only” as furiously and unconvincingly as the centrifuges in Iran, what else could he do?
That he managed to deliver his platitudes without mentioning the word “Israel” in a Friends of Israel meeting was as odd as not mentioning ‘the deficit’ in a keynote speech to the Labour party conference.   No-one shouted out “Say the word Deficit” from the back of the hall at that meeting, but someone did shout out “Say the word Israel” from the back of the hall at this one, before being duly bundled out.

“On Northern Ireland, he claimed that he was not in fact an obscure backbencher but was intricately involved in the peace process. Precisely the same claim has been made regarding the Middle East. Rather than admit to having spent decades palling up to the worst anti-Semites and Israel-haters worldwide, Corbyn is trying to claim that he has in fact been involved -- deep undercover, away from the eyes of any respectable negotiator – in a "peace process." Why did he meet with Eisen? Peace process. Why did he meet with Hamas? Peace process. Why did he meet with Salah? "Inter-faith issues." You would have to be a child to fall for this. Unfortunately for the Labour party and the country, many of the thousands of people who joined the Labour party to vote for Corbyn are practically children. Or adults who are at the very least radically unbothered about having as a party leader a man who has supported the violent enemies of the United Kingdom and our only democratic ally in the Middle East.”

What we need from the BBC is some robust direct questioning of Jeremy Corbyn about his relationships with Islamists and terrorists. He claims he doesn’t do ‘irritation’, perhaps forgetting how rattled he got with Krishnan Gur-Murthy. In fact, rather than ‘a nice man’ he seems like an anti-Israel fanatic on of the verge of irritability all the time.
Posted by sue at 13:46