On the panel was, inevitably, Abdel Bari Atwan (the Palestinian extremist who's the programme's most regular guest). His peepers were bulging and his hands were jabbing about in all directions like an overexcited amateur conductor attempting to perform a piece by Stockhausen. He was shouting about the West being to blame for everything (as usual).

Alongside him sat Annalisa Piras of The Great European Disaster Movie fame, also getting overexcited and taking Bari's side. She looked as if she was conducting a piece by a gentler Italian modernist, say Luigi Dallapiccola. (Go on, say 'Luigi Dallapiccola'!)

Opposite her sat the BBC's French go-to-lady Agnès Poirier, Agnès seems to have become very sensible these days - meaning she says more things I agree with these days. (She seems to be taking a path similar to Nick Cohen at the moment).

And next to Agnès was Alex Deane of ConservativeHome, who's always sensible! Alex kept advising Bari and Annalisa to calm down and stop shouting.

This was one of those Datelines where sharply contrasting voices were heard, instead of just a mush of like-minded left-liberal types agreeing with each other (as still too often happens).

Oddly, despite all the shouting, this was one of the most enlightening editions of the programme I've heard in some time. Sharply differing views, challenged and argued over, helped this viewer for one to make a bit more sense about what I think about the migrant crisis. (I'm still needing all the help I can get on that front).

By the way, I do recommend Agnès Poirier's Twitter feed (for those who don't hate Twitter), of which this is a flavour: 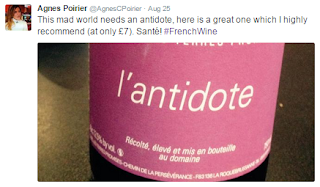