More verbiage about the interview I mentioned below.

I woke up this morning (no, I’m not going to start singin’ de blues) and heard Sarah Montague announcing that we're going to hear later in the programme 'what British Jews think of the situation in Gaza.'

Oh, I thought to myself, I’ll stick around. Maybe I’ll hear a different perspective from the usual BBC fare, surgically targeted emoting. You know, the precision engineered tearfulness that strikes without any collateral context whatsoever.

At last, I’m thinking, we might get to hear something to counteract the wall-to-wall one-side-only reporting from a place where the number of innocent civilian males between 18 and 50 killed by ‘the Israelis’ seems to outnumber the entire population of Gaza, for balance. You know, balance, the flagship quality, which is at the heart of the BBC and its charter. Not the heart; the core.

It was a long wait, somewhat alleviated by the encouraging news about the forthcoming Trojan Horse report. An interview with the headmistress of another Birmingham school who was full of praise for the thorough research and preparation shown by the investigating team. Their findings are anticipated with interest.

Another trail promised the views of “Israeli Jews”, so not British Jews then?


Never mind, at least we might get a bit of balance as per the BBC’s pledge.

At last, after 8:am and two hours of anticipation, we finally got what we were waiting for.

If the item had been introduced as “the views of one deranged self-hating Israeli and a Rabbi who is too nice to say anything of substance,” then it would have been fair enough. It would still have been excruciating, but at least it would have been honest. 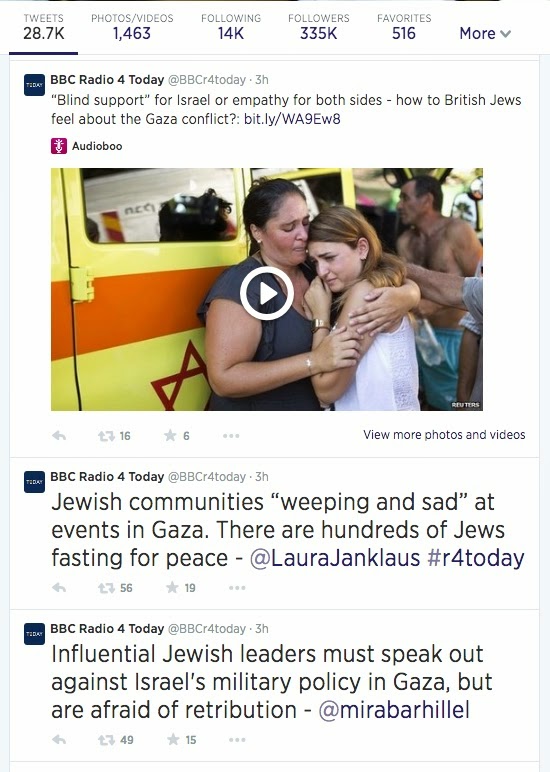 “Blind support” for Israel or empathy for both sides - how to(sic) British Jews feel about the Gaza conflict?: http://bit.ly/WA9Ew8
Says the Today Programme's twitter feed.

So support for Israel is not just any old support. it’s the special  “BLIND” kind of support. ( Blind; ergo wrong)
The Audio Boo clip doesn’t do justice to the full extent of the offensiveness. It doesn’t catch Sarah Montague’s introduction, for a start.
She begins by asking why Mira B-H tore up her Israeli passport, or made a bloody great fuss, very loudly, about threatening  to do so.

Actually, Mira B-H has been an Israel-basher for quite a while don’t you know. Thrives on it. Made a career out of it.
So, she wants nothing to do with the Jewish community’s almost blind support for the Israeli government, and I don’t suppose they’d want anything to do with her either, even with their eyes wide open.

“And you think that hasn’t been said loudly enough by Jewish communities around the world?” says Sarah, bizarrely assuming that Jewish ‘communities’ agree with such a nonsensical allegation.

“It hasn’t been said at all!” Mira exclaims. “I’m still waiting to hear the voices of influential Jewish journalists and writers in this country” she adds, conveniently forgetting her own influential Guardian contributions, amongst others too numerous to list.

“Perhaps it’s because they don’t think that” ventures Sarah, tentatively.

Now for the bit about intimidation. We’ve had all this ‘Muslims are the new Jews’ palaver, where Islamophobia has become a fashionable topic for the themed dinner party, almost equalling antisemitism in popularity, but now Mira B-H is bringing us “Jews are the new Muslims”.

According to Mira B-H’s inner voices, dissenting Jews (dissenting from the common and garden “blind Jews”) are  disenfranchised, ex-communicated and their children are friendless and  bullied at the hand of Jewish community leaders. So, a kind of Jewish Trojan Horse scenario. The Trojan Jew affair.

“Rabbi Laura J-K, how do you feel about what’s going on in Gaza?” says Sarah expectantly.

What is the good Rabbi expected to say? I couldn’t give a shit? Well, she doesn’t say that, obviously.
She says ‘we feel empathy with both sides, we’re heartbroken and what Mira says is not true.’ But she would say that wouldn’t she. That is what the audience will think.

“But supportive of what Israel is doing in Gaza? asks Sarah, her voice trembling with incredulity.

“It’s complicated. People are speaking out.”

“People are too frightened to speak out.” Mira B-H assures us before her next, particularly offensive contribution.

“Heartbreaking pictures of children killed and dying, but you mention the number of Israelis  killed, who, apart from two, are all soldiers doing their duty. You might as well count Hamas militants being killed.”

'Soldiers doing their duty?' Like, robots, mechanical and disposable, as opposed to human beings? as opposed to children of loving parents?  Some of them aren’t even 20 years old you stupid person.

Doing their duty? Of course they have to do their horrible, dangerous, life threatening duty.

“You might as well count Hamas militants being killed”

Ah. Well that’s another thing altogether. You jolly well might. You jolly well might as well count them because apparently there aren’t many. That’s obvious, because most of the dead are civilians, surely you’ve heard that? It’s been announced enough times on the BBC. In fact, every single time a new death toll is given out, that particular piece of information tops it off. So counting them would indeed be interesting.

“There is no proportion and there is no balance. If Israel had pictures of dead and dying they’d hand them out, but there is none.”

No they wouldn’t and yes there are.

Rabbi Laura J-K gets irritating now. She’s on the back foot and produces irrelevant and creepy evidence that nice Jews empathise with the Muslims and lots of them fasted on Ramadan to prove it. I think that is quite creepy and pointless, but there you go. I’m not nearly as nice as Rabbi Laura.

Neither is Mira.
She’s had a lot of trolling. Twitter and that. And an organisation called Cif Watch, which, instead of concentrating on balance, which they purport to do, has 'reported her to the police over some more innocuous stuff' she’d written previously. Sounds pretty balanced to me.