The news about Donald Trump and Kim Jong-un's agreement to meet for talks has drawn some interesting reactions so far. 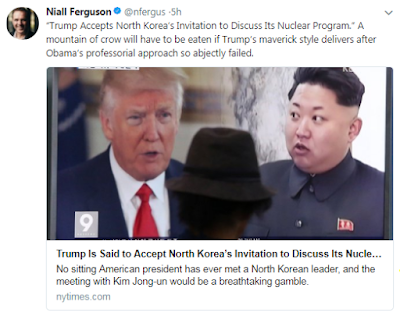 So is the BBC being "partisan" over this? Well, all I can say is that their main BBC News website report about it waits for Paragraph 21 to devote one paragraph alone to citing someone giving President Trump credit.

And the usual suspects are being sour about it on Twitter.

Anthony Zurcher's Twitter feed (so far) is particularly "partisan" and, yes, he gives North Korea all the credit for a possible "diplomatic triumph":

As for Katty Kay, well, she's been very quiet about it (so far), simply re-tweeting a rather sour comment from a former Clinton Era Democrat defence secretary:

Take a look at Laura Bicker's prominent 'analysis' piece on the BBC News website, and you'll see that her take is just as jaundiced as Anthony Zurcher's.

Her write-up of South Korean president President Moon Jae-in's role is measured in tone and full of respectful language. He's the one she's giving credit to.

When she deals with Donald Trump, however, a disrespectful tone crashes in:

How typical this is of the BBC's reporting of the story I'll try to find out after getting work out of the way today.

Update (17.15): And what's the first thing I see on my Twitter feed after getting in from work? This from the BBC's ever-so-impartial World Affairs Editor (his one tweet on the subject):

I can't help but think that if President Obama had done what President Trump has done John Simpson would be praising him as a peacemaker rather than damning him as a dupe.