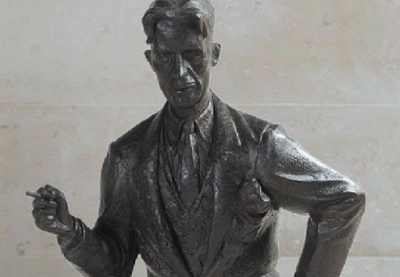 References to the year 1948 have rained down upon us like stair rods in the BBC’s output recently. Of course, it is the 70th anniversary of the founding of the NHS. That cannot have escaped anyone’s notice.

However, as I mentioned recently in the open thread on this site, 1948 is also the 70th anniversary of the implementation of the post WWII Attlee Labour Government’s 1947 Transport Act, which led to the nationalisation of the railways and road haulage industries. This anniversary seems to have been missed by the BBC.

Another 70th anniversary this year is the writing of Nineteen Eighty-Four by George Orwell - though it wasn’t actually published until the following year. This particular anniversary has proved somewhat problematic for the BBC and their well-oiled smoothly efficient publicity machine. It was in November last year that the Martin Jennings sculpture of a standing Orwell was unveiled amid a slightly embarrassed awkward silence. The muted coverage appeared on the BBC News website:

Under the headline … ‘Why George Orwell is returning to the BBC’ …. are a series of nervously compiled snippets compiled by Vincent Dowd which confirm the BBC’s disquiet.

The reason for the BBC’s uncertainty is over how to honour George Orwell’s memory, and whether or not to claim him as one of their own. It is a dilemma. Dowd’s article makes reference to Orwell’s time at the BBC:

… ‘For decades, its staff have delighted in the suggestion Orwell took his notion of absolute hell from two years spent at the BBC.

Near the end of Nineteen Eighty-Four, Winston Smith finds himself trapped in the Ministry of Love's Room 101, "many metres underground".

He must face the worst thing in the world (which turns out to be a rat). Since the book came out in 1949, some have suggested it was Orwell's comment on a similarly-numbered room at Broadcasting House, where he had to tolerate endless dull meetings.’ …

A statue of Orwell had been considered for many a year by the BBC. The idea was rejected by former DG Mark Thompson in 2012, but it was only when the new DG Tony Hall arrived that the project took off. Funding for the statue, we are told was from a trust, backed by many notable elite friends of the BBC such as Ian McEwan, Andrew Marr, Ken Follett, Rowan Atkinson and the Kinnocks.

The near life-size bronze statue of Orwell is by sculptor Martin Jennings. The late Gavin Stamp said of it in Private Eye in 2017: ‘Orwell "surely deserves better", .… "The great man is depicted holding a fag, dressed in a crumpled suit and standing like a music hall artist about to crack a joke. The plinth is pathetic. ... No hint here of Orwell's ambivalent relationship with the BBC.”’

The BBC’s half-heartedness in this project is at first glance no more than a wasted opportunity, but beyond that, it tells us more about the BBC’s commissioning group’s desperation to grab onto Orwell’s shirt tails than it does about Orwell himself. Orwell’s belief was in a genuine awareness of social injustice and a genuine commitment to democratic socialism. It is as a pale reflection of his deeply held beliefs that the BBC commemorate Orwell - from a message that has been diluted and corrupted by retelling in the closed world of the BBC left liberal elite - Champagne socialism.

What the BBC miss completely is the reality of Orwell’s predictions laid out in 1948 in Nineteen Eighty-Four. His fears over Big Brother, the Thought Police etc are being played out by the BBC right here right now. Orwell might have been 30 or more years out in his timing, but nevertheless, his foresight was unnervingly accurate. ‘No hint here of Orwell's ambivalent relationship with the BBC.’ … writes Stamp. No hint either of the hypocrisy of the BBC commissioning group and the irony that they should see fit to ‘adopt’ Orwell as their own. They stumble over privilege. Like themselves, Orwell enjoyed a privileged upbringing winning a scholarship to Eton before passing entrance exams to enter the Imperial Police Force in Burma.

The Orwell statue epitomises the struggle for identity that the BBC face. The left-wing agenda, as handed down by the BBC to us, the proles (to use the Nineteen Eighty-Four parlance), the hapless licence-payer, by their own privately educated elite privileged group of pseudo-socialists, falls well short of the real thing - when compared to the self-inflicted experiences of Orwell as he lived for a time the life of the underprivileged. By absorption, the BBC might hope to emulate Orwell - but they can’t. They would not put themselves in that position, and, as few if any appear to have come from genuine Labour-voting working-class environments, their protestations over equality, fairness and the like lack authenticity and commitment.

What should have been the statue of a great man became a land-grab of Orwell’s intellectual high ground and socialist belief which the BBC have encompassed within their own putrescent swamp.

Some of the responsibility for the damp squib must lie with the choice of sculptor. Jennings’s work consistently shows a tendency to caricature of the subject in a theatrical fashion rather than to craft a character study through a truthful representation. An inappropriate jauntiness has been applied to the 2007 figures of John Betjamen and Philip Larkin, which, as with the Orwell figure, detract from the viewer’s ability to relate earnestly to the character on display.
Posted by Craig at 14:50