A short medley of observations about BBC bias, Jeremy Corbyn, and related matters.

I am not a Beeb-basher, not least since so many of the people who bang on relentlessly about the BBC’s supposed biases are stupid or horrible or both.

So says James Kirkup on the Spectator (£)  His area of expertise appears to be transgenderism. And he has spotted a bias related to this issue within the BBC. Personally, I can’t seem to get interested in transgenderism no matter how hard I try (not very) but I have to admit that when I see a six foot five-inch ‘woman’ in high heels and mini skirt mincing along, the mind does automatically boggle.
I didn’t get very far with Kirkup’s article. As someone said below the line, tl;dr, but I did ask myself if I was truly stupid and horrible -  wot, moi?  - but then I realised he wasn’t talking about us (Craig and I.) surely he had to be talking about the semi-literate Momentum type keyboard warriors that accuse the BBC of being the mouthpiece of the far right. Like the tweeters on the Victoria Derbyshire thread. You know, the Judophobes who get cross when they’re accused of antisemitism.

H/T Anonymous (Open Thread.) In a post, circa 2006, Peter Hitches presents a curate’s egg type précis of pre-Nazi era antisemitism, from which I have plucked the following excerpt:

“But of course most people don't form their opinions in this way. They pick them up, as they pick up other fashions, from what they hear around them, from the prejudices of the media, which become their prejudices by a subtle process. These, by the way, don't take the form of the BBC correspondent saying "Israel wickedly bombed civilian targets last night". You only catch it on the edge of a remark. The reporters themselves often don't know they are doing it. It is their unconscious choice of verbs and nouns, their tone of voice, the selection of pictures and the attitudes to spokesmen that you have to watch.

For instance, Palestinian and Arab spokesmen tend to be interviewed respectfully and courteously, whereas Israelis are often interrogated fiercely and aggressively (Watch out for this. I'm interested to see if any readers noticed a flagrant example of this on a well-known news programme recently).

Well, if this bias is based on racial prejudice, which I rather suspect it is, then it should stop right now. And if it is designed to appease Muslim hostility to Jews (which I am afraid to say exists, encouraged by some passages in Muslim scripture, and which - unlike Christian Judophobia - is not adequately disowned and denounced by the leaders of the religion) then that is just as bad.

“There is a great danger looming inside Labour. Its shadow extends from the British Isles across the West, including the United States. That danger has a name, Jeremy Corbyn, and there is a duty to prevent his ever coming to lead Her Majesty’s Government.

Then, of course, there’s our own Rod Liddle. (£) (He's not literally 'our own') We used to write “Is the BBC’s bias due to ignorance or malevolence?” we never settled that question, but of course the answer is ‘a bit of both’. 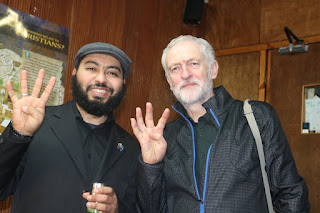 But what Corbyn has never done is meet with the other side. He will not meet with the Israeli government, ever. He has not done so. The last Labour party trip to Israel commended itself for not meeting a single figure within the Israeli government. Corbyn himself declined even to meet Benjamin Netanyahu when he visited Britain. So the dialogue for peace stuff is a downright, absolute lie. He is an anti-Semite who, furthermore, is happy to suck up to whatever foul ideology is opposed to this country’s interests or the interests of western democracy. Cuba, Venezuela, Soviet Russia, Black September, Hamas, Hezbollah, the IRA. You name a crock of purulent, murderous, anti-democratic, racist shit — and he’ll be for it.

Oh — and the BBC. Nice of you, auntie, to cover the story of the wreath-laying two days later than everyone else did. I have a screen shot of BBC News online on the day the papers were carrying the Corbyn story. As both Guido Fawkes and later the Daily Mail pointed out, there were no fewer than six stories about Boris Johnson making a joke about letterboxes and none at all about Jezza. Get rid of the licence fee, now. The level of bias has become absurd.

And now for something completely different.

Poor little Ahed. How ever did she endure her eight-month incarceration?


“Yet far from denouncing Corbyn, his supporters are turning a blind eye to the photo, or are even denouncing its publication as yet another smear on their Dear Leader. And that’s because the man Corbyn was snapped alongside wasn’t linked to the slaughter of imams in a mosque but to the slaughter of rabbis in a synagogue. And as we now know, almost beyond reasonable doubt, Jews matter less to Corbynistas than every other social group.

The photo published in the Times comes from the now infamous 2014 ceremony in Tunisia; it shows Corbyn mixing with Maher al-Taher, leader of the proscribed Popular Front for the Liberation of Palestine. This was an often ruthless terror group. Just a few weeks after Corbyn hung out with its leader, the group claimed responsibility for an attack on a Jerusalem synagogue in which four rabbis, including a British one, were massacred with guns, knives and axes. The photos of the synagogue’s floor and books coated in blood are among the most disturbing to come out of the Middle East in recent years.
[…]
As I say, double standards. Jews and Jewish issues are always treated differently by Corbynistas. And there’s a word for that: prejudice. If you attack people for making mild gags about burqas but shrug your shoulders over people who mix with men whose associates murdered Jews in a synagogue, if you say freedom of speech is unimportant except when it comes to the freedom to call into question the legitimacy of the Jewish State, then you are sending a quite extraordinary message into the public sphere: ‘Jews are different. They’re fair game. Screw them.’