OK, let me just end this section by by reading what the Labour spokesman's told the Telegraph...

I did think myself of posting about Paddy's behaviour here. He often jumps in and challenges or changes the subject (or both) when something controversial-sounding comes up or when he thinks the guest is going too far - and he did it last week when Chris Neal began ranting wildly about Boris Johnson (as I commented here at the time) - but, yes, this was a particularly 'edgy' interruption and a particularly determined change of subject.

As well as being interested in what historian David Abulafia had to say about the story, I was also struck by Paddy O'Connell's dramatic first interruption and then his swift 'moving on' from the story:

Paddy O'Connell: David Abulafia, you want us to start...wherever you like.
David Abulafia: I'd like to start with the Daily Telegraph, at page 17, where there's an excoriating article by John Jenkins, who was British Consul General in Jerusalem earlier this decade, this century, and it's called "To Islamist Jeremy Corbyn is just a useful idiot", Now, the Consul General in Jerusalem - very interesting post, because he's not accredited to the government of Israel. He's effectively ambassador to the Palestinians - and here is somebody who really takes issue with Corbyn over his contacts with Hamas and who particularly takes issue over the fact that, well, if you're trying to talk to one side but you're not talking to the other at all. And indeed the moderates, Palestinian moderates, get totally left out of this as well. And he makes the same point about the Ulster Unionists as well...
Paddy O'Connell: (interrupting) So do you think all politicians should disclose that talks with everyone in the past. I mean, what's the point? How far to go back? And then do we look at everyone? What's the public record? What should it be?
David Abulafia: I think when one's looking at the leader of a major political party and when some of these contacts are with groups which are frankly terrorist groups - I mean, the IRA and Hamas - then it is a matter of very great public interest.
Paddy O'Connell: OK, let me just end this section by reading what the Labour spokesman's told the Telegraph: "Jeremy's a long record of campaigning for peace, democracy and helping to end conflict through dialogue and negotiation, while John Jenkins has argued against Saudi Arabia introducing democratic elections". So we can see that this argument will be back with us next Sunday. Thank you very much. Marie Le Conte, where first for you?

Kathy at The Conservative Woman has taken Paddy to task for this:

At which the programme’s presenter Paddy O’Connell, with an edge to his voice, asked: ‘Do you think all politicians should disclose who they talk to in the past?’

If you listen, you will hear Abulafia standing his ground. With significant weight, he said that when it comes to the leaders of major political parties, and some of these contacts are with terrorist groups, ‘then it is a matter of very great public interest’.

Amen to that, I thought. But not so Paddy. Was he content to let it rest there? What, let a guest malign the Left’s leader without a comeback? ‘Ok,’ he said dismissively, ‘let me just end this section by reading what the Labour spokesman told the Telegraph: “Jeremy has a long record of campaigning for peace and democracy and helping to end conflict . . .”’ and so on, as though this was necessary balance to a slightly off-the-wall opinion.

So is this ‘balance’ now the norm when it comes to Mr Corbyn, used to cut off criticism of him?

And is this the exercise of impartiality or the abuse of it? Are BBC executives using a perverted notion of balance to dissociate themselves from criticism of Corbyn when what they should be doing is investigating and reporting on his known terrorist sympathies?

I did think myself of posting about Paddy's behaviour here yesterday. He often jumps in and challenges or changes the subject (or both) when something controversial-sounding comes up or when he thinks the guest is going too far - and he did it last week when Chris Neal began ranting wildly about Boris Johnson (as I commented here at the time) - but, yes, this was a particularly 'edgy'-sounding interruption and a particularly determined change of subject.

And that is 'controversial' too.

As far as I can see, the Labour assertion is based on something put about by an online London-based news portal called Middle East Eye. (According to Wikipedia, it is Qatari/Muslim Brotherhood-linked, despite its denials.)  That said, the writer is none other than Peter Oborne.

Looking at a transcript of what Sir John Jenkins actually said his point is that the Arab world is a hard place for democracy to grow, that elections there tend to produce "tribal, reactionary, sectarian and unstable governments" and that Islamism and democracy aren't easily reconcilable. I don't get the slightest sense that Sir John would be unhappy if a genuine stable democracy was achieved in Saudi Arabia.

So, after then reading Peter Oborne's less-than-nuanced take on it, it suggests to me that the claim the Labour spokesman regurgitated wasn't at all fair to Sir John (to put it mildly).

And yet Paddy simply passed it on.


P.S. Here's another Middle East Eye writer tweeting about a "hidden hand" (a phrase with a strong antisemitic pedigree) behind the criticism of Jeremy Corbyn over antisemitism, and a reply: 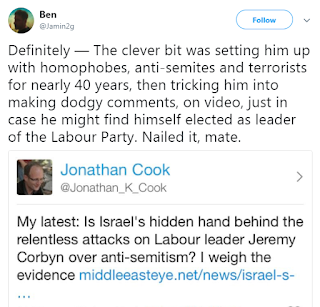