Over at Biased BBC I see that Roland Deschain has "decided to attempt to keep an ongoing list of pro and anti Brexit headlines appearing on the BBC’s main webpage each day".

That's a worthwhile project, given that the BBC website seems to be featuring at least one anti-Brexit story a day at the moment and no counterbalancing pro-Brexit ones, and such things need monitoring over time.

On top of the People's Vote story (which was my choice of anti-Brexit story of the day), RD notes:

Here is today’s, this time in the guise of the paper reviews but guess what gets the prominence? 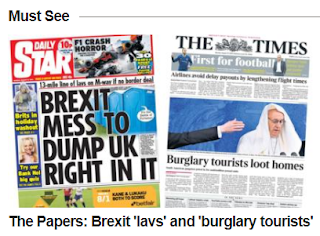 Fancy the BBC making the Daily Star its main headline of the day!

The BBC's summary of the story runs as follows:


Leaving the EU without a deal will lead to such long queues at borders that the government is ready to deploy a "13-mile line of lavs", says the Daily Star. The paper says Portaloos could be installed along the motorway leading to Dover to provide "relief to stuck truckers".