BBC Newsreader: A man has pleaded guilty to plotting a terrorist attack in central London, and raising money to fund terrorism. 26-year-old Lewis Ludlow from Kent had planned to hire a van and target pedestrians on Oxford Street, at Madame Tussauds and at St Paul's Cathedral. He'd hoped to kill up to 100 people. He'll be sentenced in November.

And that was it.

And this was the image of Lewis Ludlow used by that BBC programme to illustrate its story: 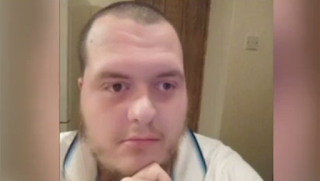 ITV Newsreader: A Muslim convert who became obsessed with so-called Islamic State is facing life behind bars, after plotting to kill 100 people in an attack outside the Disney Store on London's Oxford Street. Lewis Ludlow, from Rochester in Kent, called himself The Eagle. As Emma Murphy explains, he also drew-up a list of other potential targets, including Madame Tussaud's and St Paul's Cathedral.

Lewis Ludlow: My name is Ali Hussain. I'm a revert to Islam...(indecipherable)...and I became Muslim when I was 16.

Emma Murphy, ITV: This is 26-year-old Lewis Ludlow, an ISIS recruit who today admitted that his religious zeal meant he hoped to commit mass murder in a jihadi attack. His target was the Disney store in central London, a placed packed with families every single day. He had done his research and sought to maximise casualties by attacking on a Saturday lunchtime. Documents found drawn up in Ludlow's home detailed how he'd carry out his lone-wolf attack. He noticed that Oxford Street was a long road with no barriers or bollards to stop him mounting the pavement and ploughing into people.  His hope was to take at least a hundred lives. Other notes show he was also considering attacks on St. Paul's Cathedral and Madame Tussaud's. Photos of his targets were found on his phone. He'd already started to raise money for ISIS through a fake antiques website and had written an oath of allegiance.

Emma Murphy, ITV: He was already under police surveillance having taken part in rallies by the radical preacher Anjem Choudary. He was later seen taking part in a poppy protest and was known associate of the man who murdered Fusilier Lee Rigby. In videos Ludlow nicknamed himself 'The Eagle'. "I grew up amongst you, I learnt your culture, your ways of life and your disgusting debauchery", he said. "I reject all of this. There is nothing between us except animosity and hatred. We love death as you love life so, therefore, my allegiance is to Islamic State. I have nothing for this country of Britain. I spit on your citizenship, your passport. You can go to hell with that". Ludlow today pleased guilty to two terror offences and will be sentenced in November.

And this was the image of Lewis Ludlow ITV used to illustrate its story: 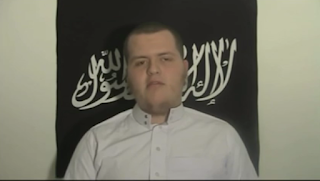 I'd call that an open-and-shut case of BBC by omission from the BBC.

Yes, the BBC will censor the news in the cause of maintaining social cohesion.
Posted by Craig at 19:53