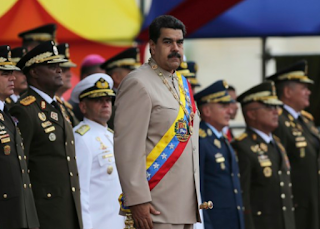 I saw (via Guest Who) a couple of critical comments about this morning's Today: 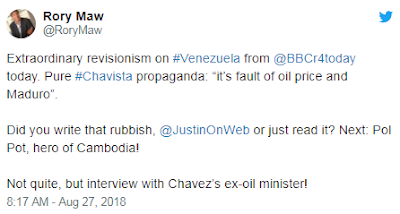 They were tweeting about Justin Webb's introduction to the 8.10 feature on the refugee crisis in and around Venezuela:

Venezuela has more oil than Saudi Arabia. It should be very rich. It was very rich, the richest economy in South America. Under its long-time leader Hugo Chavez it used its wealth to reduce inequality and improve the lives of the poorest citizens, but when Chavez died and the oil price tanked Venezuela changed. The new leader President Maduro has steered his nation into what can only be described as a catastrophe - a humanitarian disaster in which children are starving, hyperinflation is among the worst the world has ever seen and people are trying desperately to leave.

Here's an alternative view: Due to vast overspending on welfare programs and the fixing of prices under Hugo Chavez, and the nationalisation and then abandonment of farmland, and the fact that the late president made the country dependent on selling its oil abroad, when it all came crashing down under his incompetent successor it surely only fell so disastrously because Mr. Chavez had already turned the Venezuelan economy into one huge house of cards.

That's a point of view. So is what Justin Webb said (or read out). And both are controversial, given their relevance to a major political party here in the UK.
Posted by Craig at 09:20