I know Jeremy Corbyn appreciates English irony, so he should love this. The man who’s been fighting racism all his life has a fanboy.

As the skeletons are being dragged out of the cupboard one by one, a more worrying irony is that Jeremy could shoot somebody in the middle of the street and he still wouldn’t lose any votes.

None of this will come as a surprise to anyone one who has been aware of these skeletons for decades.

The BBC has an unusual take on the story. It’s that Luciana Berger ‘feels unwelcome’,  the moaning minnie. 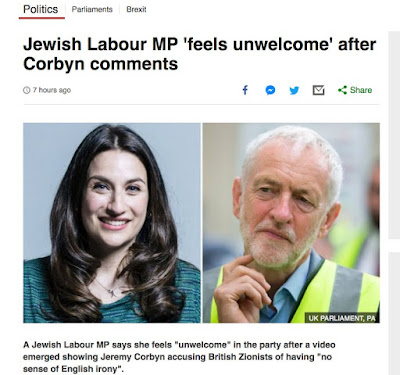 “As we move rapidly towards the final denouement, which will be the liberation and unity of all the Palestinian people”


Oh yes, and from "the incredibly powerful, passionate and effective speech" by the previous speaker (the Palestinian Ambassador to the UK) Manuel Hassassian says:


“We, the Palestinians, the most highly educated and intellectual in the Middle East, are still struggling for the basic right of self-determination. What an irony. How long are we going to suffer and be patient with Israel? [...]

“And today we have 1.5 billion Muslims. In 20 years we will have 2 billion. And those 2 billion, forget about politics, from a religious perspective will not allow Israel to continue desecrating their religious rights (in Jerusalem). And then what?”


A couple of interesting trends in the reaction to various outings of Jeremy Corbyn’s antisemitism (gleaned from articles and btl comments in the press and online, Twitter etc.)

1) Denying that he’s an antisemite (by insisting that anti-Zionism has nothing to do with antisemitism) while simultaneously making unambiguously antisemitic comments.

2) Being ‘bored’ with the topic. “nobody cares”. I think there’s something in this comment from a regular HP poster (with whom I don’t always agree.)

I think that making antisemitism the main focus of criticism of Corbyn has been a mistake of epic proportions that will come back and bite British Jews, although I hope I am wrong. Aside from the fact that most Brits don't care all that much about it -- it isn't the burning issue de jour for most -- it could very likely rebound on the community if he wins, and even more so if he loses. It would have been better for the community -- and MUCH better strategically vis a vis the election -- to focus on his support for local ie IRA terrorists and places like Venezuela. He should have been hammered relentlessly on issues like that.

and while we're talking about Corbyn, this.
Posted by sue at 08:58