"Ultimately, he was to lose to History in the form of Barack Obama" 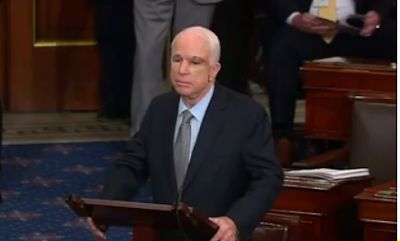 It must be said that the BBC is paying handsome tribute to Sen. John McCain today.

(Wonder who he's hinting at there?)


John McCain was a politician of principle. A patriot, who believed in his country, and fought for it at tremendous cost to himself. As a young Navy pilot, he was shot down over Hanoi, interrogated and tortured. His captors saw a potential propaganda coup, when his father became the commander of US forces in Vietnam and offered him release. But John McCain refused, despite the many beatings he had suffered. On his return, he was hailed as a war hero and entered politics and would eventually spend 35 years representing Republicans inside Congress. But he was fiercely independent and often spoke out against the party, notably challenging the influence of big money on American politics.

John McCain: The party establishment will have to finish me off anywhere.
Reporter: Why is that?
John McCain: Because I will break the iron triangle in Washington of money, lobbying and legislation and they know that would be very, very disruptive, financially, to a lot of people's lives.

He may have challenged Washington, but he was respected here, too. And in 2008, he was selected as a Republican presidential candidate. But his campaign was not without mistakes and he was criticised for choosing Sarah Palin as his running mate. Ultimately, he was to lose to History in the form of Barack Obama.

John McCain: I wish the outcome had been different, my friends. The road was a difficult one from the outset. But your support and friendship never wavered.

In the divisive and aggressive world of American politics, there was always respect shown between President Obama and John McCain. But Donald Trump didn't always show McCain such courtesy.

His influence was still obvious in the twilight of his career. After brain surgery, he walked into the Senate and stopped Donald Trump's attempts to get rid of the Obamacare health reforms. With a grand gesture, he turned his thumb down. John McCain was a fighter till the end. He lived longer than expected after being diagnosed with an aggressive form of brain cancer. His family said it was with his usual strength of will that he chose to stop receiving medical treatment, but he was a man who never gave up hope in politics, or in his own personal battles.

John McCain: I'm going home for a while to treat my illness. I have every intention of returning here and giving many of you cause to regret all the nice things you said about me. And I hope to impress on you again that it is an honour to serve the American people in your company. Thank you, fellow Senators, Mr President. (APPLAUSE).

As a young Navy pilot John McCain was shot down over Hanoi during the Vietnam War. He was tortured, interrogated and kept prisoner for five and a half years. It was an experience that left him with lasting injuries. When he eventually returned to the United States he was treated as a war hero. He eventually enter politics and spent more than three decades as a Republican representing the state of Arizona in Congress. But John McCain was, in his own way, fiercely independent and always prepared to criticise and challenge the party's policies if he felt it was needed. Yet despite that reputation as a maverick in 2008 he was selected to run as a Republican candidate for President. It was a contest he lost to Barack Obama. Although the two men had a clear respect for each other the same couldn't be said for the relationship between Mr. McCain and Donald Trump. He was one of the current President's fiercest critics. Mr. Trump never forgive him for thwarting his attempts to repeal Obamacare health reforms.

I think we can summarise the BBC's position here: Mr. McCain was a brave, decent patriot who made mistakes (principally in choosing Sarah Palin as his running mate) but, ultimately, was a true giant of US politics - a man who stands in sharp contrast to Donald Trump.
Posted by Craig at 12:45