I was watching the discussion about UK politics on last night's Newsnight, which (thankfully) had less predictable guests than usual and, as a blogger about BBC bias, I (predictably) Googled the guests and found French freelance writer Marie Le Conte and her likeable Twitter feed.

On that Twitter feed she told the world a very short story, which I thought I'd share will you (just for the sake of it):

Got a phone call from Newsnight. Do I want to come on to talk about Macron and May? Yes I do! But I'm not dressed for TV. Fine, I'll run to H&M to get some black dress.
I go to H&M but the selection is piss poor, I'm running out of time.

I pick up a wildly reduced flowery dress vaguely in my size, pay, run to catch the train.
It is now a few hours later, I am nearing London, I go put on the dress in the loo.

HAD YOU EVER SEEN BALLOON SLEEVES THIS BIG? 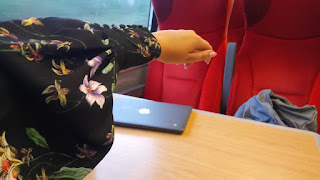 I look like a minor Medici got into Florence Welsh's pants and what they produced was an Oompa Loompa raised in Kew Gardens...

Anyway tune in later to watch our discussion on what May and Macron can gain from this dinner but also maybe to watch me...accidentally take flight?


MY ACCIDENTAL BALLOON SLEEVES WERE MOSTLY OUT OF SHOT. Praise the lord!

The discussion itself featured four guests. They looked at the plight of Theresa May's Conservatives and Jeremy Corbyn's Labour, with special reference to Brexit (as regards the former) and antisemitism (as regards the latter).

...but at least the discussion was hosted by Mark Urban, who played a pleasingly understated role.

He didn't grandstand for personal glory but kept a low profile, letting his guests speak and debate among themselves. Nor did he target one guest for different (hostile) treatment because of their point of view.

In contrast, just try Emily Maitlis on Monday's Newsnight. She hosted a Brexit-related discussion with three guests. The guest selection fell 2:1 against 'the hard Brexiteer' but that rather paled into insignificance in the light of how Emily treated her three guests. Only one of them got a barrage of challenging questions and repeated expressions of incredulity (complete with dramatic gestures) from the Newsnight presenter - and, no, it wasn't the man warning about the plight of the British sandwich after Brexit. Yes, inevitably, it was 'the hard Brexiteer' (Marcus Fysh MP) who was on the receiving end of this James O'Brien display of non-evenhanded interviewing from Ms. Maitlis. 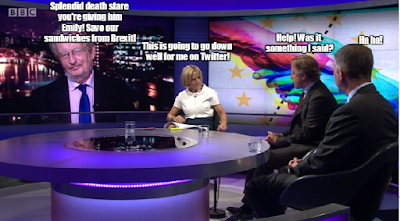 Has Emily actually been possessed by the ghost of James O'Brien? Should Mark Urban bring in some holy water and get her exorcised?

Of course, that edition of Newsnight was the one Emily Maitlis introduced by saying that the Food Industry is telling the Tories that "no deal means no sandwiches". Yes, seriously.
Posted by Craig at 12:47