More of the same (at one remove)

The 'Must See' section of the BBC News website's front page this afternoon and evening features the following article as its second story: 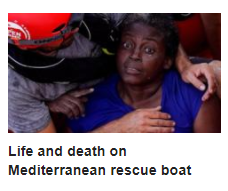 It's a piece by a Reuters photojournalist called Juan Medina about the "rescue ship" Open Arms.

As the BBC (emotively) puts it, Juan "documents the search for those lost at sea".

The piece, as such pieces tend to do, focuses on the terrible story of a woman called Josepha.

The other images, however, suggest that Josepha was a very rare woman amongst those rescued by the "rescue ship".

Juan's Twitter feed (put through Google's translating skills) shows that, despite working for Reuters, he's far from impartial. He's gone native with the "rescuers" and their pro-migration supporters.

That's his business, of course, but why is the BBC telling us that we 'Must See' his take on the migrant situation, especially without caveats?
Posted by Craig at 19:56