"The voice of the Nazis. That’s the BBC"

...and receives over 600 replies from angry members of the FBPE community, most of them pretty much the same thing: that it's "faux outrage" on Mr. Marr's part as the BBC has been "complicit" or "instrumental" in the rise of the far-right in this country by promoting Nigel Farage (including those famous 32 appearances on Question Time) and by giving airtime to the likes of Tommy Robinson, Katie Hopkins, Gerard Batten, Raheem Kassam, Steve Bannon, Ezra Levant, Sebastian Gorka and Marine le Pen. The BBC has been "platforming fascists".


Andrew Marr dipped a trepidatious toe into the responses:

Meanwhile, over on the wrong side of the Pennines, BBC Radio Leeds also issued a tweet: 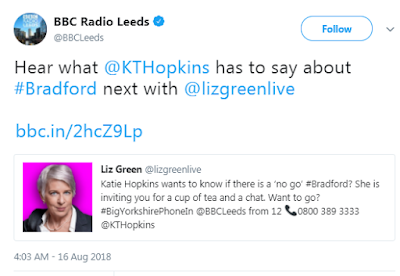 "The voice of the Nazis. That’s the BBC" came one reply, and Alastair Campbell tweeted, "Sorry @BBCLeeds but really disagree with giving this woman a platform. Her views of Bradford will no doubt be racist and sweeping. Will she call it Bradistan?".

Today a Labour MP leaped onward and tweeted the following to the BBC's head of live political programmes Rob Burley:

The exchange between them has (so far) gone as follows:


Rob Burley: I don’t work for BBC Leeds.
Stephen Doughty MP: But you have oversight of  BBC News political programming right? Do you all just work in silos? Genuinely interested... would you invite her on one of the network political broadcasts?
Rob Burley: No. I run a set of programmes - they are listed on my bio. I can’t answer for regional political output.
Stephen Doughty MP: Ok - so you’re saying there’s no consistent editorial policy across political output on the BBC? Genuinely useful to know. Can I just ask again - would you invite her on to network political programmes you *are* responsible for?

Rob hasn't yet replied to that. I'm all intrigued to read what he'll say when he does.

Of course, by branding everyone from Nigel Farage to Tommy Robinson, from Katie Hopkins to Sebastian Gorka as "far-right" and then by tying them in with (a) old-time fascists and Nazis and (b) present-day far-right terrorists, these complainants are trying to make such people appear utterly beyond the pale. And they are also seeking to force the BBC refuse to give them - and their views - a platform, i.e. to censor them.

Hmm, what if other free-speech-hating people started demanding that the BBC stop platforming the far-left (Paul Mason, Owen Jones, Ash Sarkar, etc) and even attempted to bully the BBC into not platforming political figures (even Labour Party leaders) with links to (a) old-time communists and (b) terrorist organisations? What then?

Incidentally, the idea that Nigel Farage, despite his many Question Time appearances, was ever given an easy platform by the BBC is absurd and the reverse of the truth. Interviews with him over many years tended to fixate on accusations of racism in his party and BBC reports about his party had a pretty relentlessly negative focus, usually focusing on the similar questions. Let's not forget:

EVAN DAVIS: Did you see the Paddington Bear movie last year?
NIGEL FARAGE: No.
EVAN DAVIS: Terrific movie with a kind of rather sort of moving, in a sense, proclamation of the virtues of multiculturalism, which I know you hate, because he's a bear, and he's different and he feels very at home and is made to feel welcome here. Now would that be a 'metropolitan elite' movie that is kind of a tragedy...a travesty of British patriotism, of British values?