Not Liking the Video


Loyal readers may recall a post from May entitled "Don't Hate the Debate" which linked to a video from BBC Teach, "suitable for teaching 14-16s", on the topic of immigration.

It was so overwhelmingly pro-immigration that I asked (rhetorically, of course), "Does the BBC really think that this video demonstrates its impartiality?"

Well, after complaints, the BBC has decided that the video doesn't demonstrate its impartiality and has withdrawn it.


Don't Hate the Debate is a series of films designed to help teachers enable classroom debates about topical issues. Each film includes a real debate between four young people, all giving views on a topic. While we believe the film did convey the broad elements of the immigration debate, we accept further efforts could have been made to involve contributors with a more diverse range of opinions, so we removed the video.

Well, yes. All four of the young people in this video did agree with each other. In fact, they could hardly have been more like-minded. It's good that the BBC has acknowledged that they got that wrong.

However, what they don't acknowledge in that statement is that the narration of the video was just as biased.

Here's a bit I quoted in that May post: 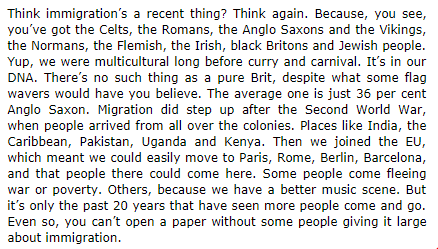 It looks as if Migration Watch had a hand in getting the video withdrawn. Here's their press release on the matter - worth quoting in full for what it has to say about Sir David Clementi, the current Chairman of the BBC:


The BBC have withdrawn an educational video after intervention by Migration Watch UK.

The YouTube video in question, produced by BBC Education and aimed at GCSE students aged 14-16, purported to be a debate about immigration, but Migration Watch UK challenged its lack of balance and a number of factual inaccuracies.

Chairman Lord Green of Deddington wrote to Sir David Clementi, Chairman of the BBC, pointing out that the video failed to provide an objective analysis of the immigration debate and therefore did not meet the BBC’s own impartiality guidelines.

The head of BBC education responded on 5 July and said that the BBC would withdraw the video with a view to re-editing. She added that 'further efforts could have been made to include contributors with a more diverse range of opinions'.

"It is refreshing that Sir David Clementi saw immediately that the material was unacceptably biased and ordered its withdrawal and revision. We have offered the BBC our assistance in producing an accurate and unbiased teaching aid on a very topical and important issue."

It appears that the video will eventually resurface in a revised form. It will be interesting to see how it is changed and how much of the original narration survives.

What the BBC puts into schools is an area that may need looking at more closely.
Posted by Craig at 13:51