Waking up to a wind bank holiday morning and checking the BBC News website, their second story today (first thing) is: 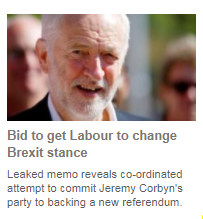 Neither Sky News nor ITV News have this story at all. And when you click into it it's a very strange BBC report indeed. It begins: 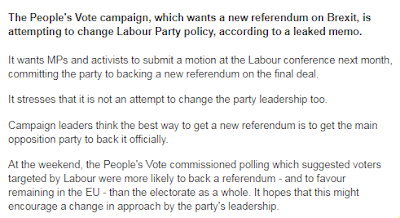 Parts of that - and bits of several later paragraphs - read as being lifted from a People's Vote press release.

Who leaked this memo? Well, reading on, it turns out that it's an internal People's Vote memo. So, presumably, it was someone within the People's Vote campaign who leaked it.

The BBC report goes on:

So to what end was the memo leaked? Well, it can hardly be to damage the People's Vote campaign, given that this BBC report can only help get their message across, puts it across in language that echoes their own, features no criticism of their actions whatsoever, and is written in such a way that it might very well appeal to the campaigners' target audience here: Corbyn supporters. So, presumably, the leak was to advance the cause of the People's Vote campaign.

Unless I'm badly missing something, this seems like an incredible editorial decision by the BBC. Why are they brazenly gifting the People's Vote campaign here?

P.S. A very benign-looking Jeremy Corbyn is the chosen image to illustrate the story: 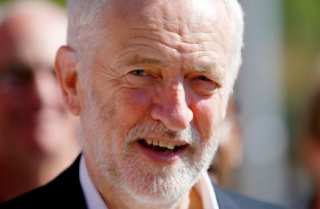 P.P.S. I agree with this comment at Biased BBC:

Tom_Kenny
August 27, 2018 at 8:17 am
R4 Today opening news item:
“A leaked memo shows the People’s Vote campaign is seeking to change Labour policy on a second referendum. It is not an attempt to dislodge the incumbent Labour leadership.” (I paraphrase).
I strongly suspect that the memo’s author – former Labour spinner Tom Baldwin – himself “leaked” the memo directly to his buddies at Al Beeb.
In what sense is this news? The campaign in question seeks to influence the policy of Labour and other political parties consistent with its objective of getting a second referendum – duh, what else would it be doing?
Baldwin has recently written a book (also covered by Al Beeb) about the evils of paid political advertising on social media, which he thinks should be banned.
But he’s got no problem with his buddies at Al Beeb advertising his “People’s Vote” wheeze at the licence payer’s expense.
It’s fake leaks, folks.
Posted by Craig at 07:13