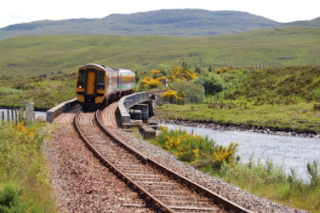 This morning's Broadcasting House on Radio 4 was quite something.

It's 9 o'clock. Hello. Good morning. This is Broadcasting House. I'm Paddy O'Connell. Here are the headlines: A campaign to force a public vote on the Brexit deal has been given a £1m boost....

Yes, the programme had made the People's Vote story its main headline. After reading out the headlines, Paddy said:

Ahead. Europe, past and present.

Theresa May: The Article 50 process is now underway and in accordance with the wishes of the British people the United Kingdom is leaving the European Union.

Well hang on! The man who wrote Article 50 is here to talk deal, no deal or delay.

I could guess where this was going, so my eyebrows were moving skywards even before Paddy mentioned who would be reviewing the papers later:

On the newspaper review the Conservative peer Patience Wheatcroft, the film fan Gaylene Gould and the comedy writer Chris Neal.


After the news, which, of course, featured the £1m donation People's Vote story, Paddy conducted two interviews on the Brexit issue.

The aforementioned interview with Lord Kerr, former UK ambassador to the EU and a long-term cheerleader for British membership of the EU, came second. Lord Kerr said that Article 50 shouldn't have been triggered so early, should now be delayed and can be taken back.

But Lord Kerr's interview was preceded by an interview with....yes, another Remainer: Ian Birrell of The Mail on Sunday. He passed on an overheard conversation between an EU ambassador and a senior British diplomat saying that a second referendum is now more likely than not.

I could hardly believe my ears by this state, but it got worse...

During the paper review Remainer Baroness Wheatcroft and comedian Chris Neal, who expressed his support for "ardent Remainers", both got to denounce Boris (though Chris's rant was quickly brought to a hold by Paddy, the latter doubtless thinking it was getting a bit too wild), and Lady Wheatcroft got to talk about the £1m donation, calling it "a great good news story", and to promote her People's Vote campaign ("...the People's Vote media hub, the campaign I'm involved with, where we are really, really striving to get a People's Vote on the deal over Brexit").

And, yes, there really were no pro-Brexit voices to be heard across the entire programme. It was pro-second referendum, anti-Brexit voices from start to finish.

Oh and for good measure Matthew Price came on to preview The World This Weekend, and guess what? Yes, he promised us more of the same:

We've got an expert today but we are giving back control to the ordinary, everyday experts. There's a man called Kevin Hopper. He lives in North Ferriby in North Yorkshire and he's an expert in the road haulage industry. He started when he was 15. He's now 60. He met the Transport Secretary about a week ago and he told him how it works now and how he's really worried about what happens if we drop out of the European Union with there being no deal whatsoever. According to his account, which you'll hear at 1 o'clock this afternoon, the Transport Secretary didn't really get it. So we'll be talking about that and wondering what would happen to Britain's road haulage industry if there is no deal.

Was this edition of Broadcasting House guest-edited by Lord Adonis perchance? Is Alastair Campbell going to guest-edit The World This Weekend today? I think we should be told!

P.S. Here's a tweet where the hashtags make the bigger point: 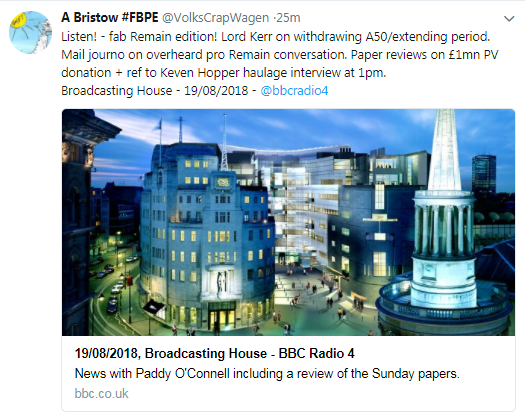