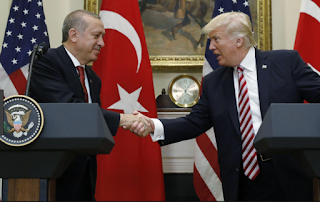 Just before Thought For The Day this morning, the BBC's World Affairs Editor John Simpson gave us his thought for the day.

His subject was the sudden chilling of the Trump-Erdogan relationship following what he described as "Donald Trump's fire-breathing tweet".

He ended, characteristically, by giving Radio 4 listeners his view of the matter:

Some countries need particularly careful handling and Turkey is one of them. Making foreign policy on Twitter may not be the best way.

Incidentally, another thing about John Simpson's Saturday morning sermons is that they often come graced with a historical parallel. This week's ran as follows:

Perhaps it's worth just casting our minds back to what happened a century ago when the First World War was boiling up. Turkey approached Britain and France to see if they wanted an alliance. Both said no - partly because they thought that Turkey as 'the sick man of Europe' didn't matter much.  Churchill, who was First Lord of the Admiralty, grabbed a couple of battleships which British shipyards were building for the Turkish navy. Germany, by contrast, greeted Turkey with enthusiasm and respect and it came into the war on Germany's side. The British military disaster at the Dardanelles was one result.

For more on the same subject (if you're as intrigued as I was) here's a link to a piece on another blog: Winston Churchill, Turkey and the High Cost of Two Dreadnoughts.
Posted by Craig at 11:31