The co-founder of Superdry is giving the People's Vote campaign a £1m donation.

Following an article in today's Sunday Times, his move has become a main story on the BBC this morning, though Sky and ITV are also covering it prominently.

However, there's more than a whiff of churnalism about the BBC's reporting of it. Their website report includes the line:

The People's Vote, a cross-party group including some Labour and Lib Dem MPs, want a vote on the final Brexit deal. 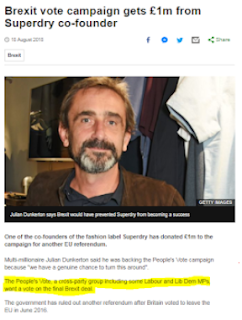 ...the People's Vote campaign, an umbrella group also backed by the Liberal Democrats and some Labour MPs, is holding a series of events across the country to try to rally support for the idea. Now it has received its biggest donation yet...

But that is factually incorrect. The People's Vote campaign also includes Conservative and Green MPs. Indeed, one of its Conservative founders is cock-a-hoop this morning:

Ah, as I'm typing, I see the BBC's website article has been updated and the incorrect information has been removed. The offending line now reads:

The People's Vote, a cross-party group including some MPs, want a vote on the final Brexit deal.

Naturally, there's no acknowledgement of the update at the bottom of the BBC article.
Posted by Craig at 10:14