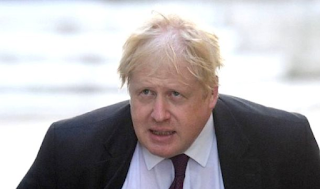 For fans of 'compare and contrast' pieces, here's a breakdown of how the UK's three main broadcasters' news websites are reporting one particular story this evening:


Boris Johnson has hit out against calls to ban face-covering garments like the burka in public places.

The former foreign secretary said Denmark was wrong to impose fines for wearing the burka or niqab in the streets.

But he came under attack for saying Muslim women in burkas "look like letter boxes" and comparing them to bank robbers.


Boris Johnson has compared women who wear the burka to "bank robbers", but argued against banning them in Britain.

The former foreign secretary said he found the covering worn by some Muslim women "oppressive" and questioned why they would "go around looking like letter boxes".

He added it was "weird" and "bullying" to "expect women to cover their faces".

He said he was against bans on face-covering veils in public places, in his Telegraph column, but added that they looked "absolutely ridiculous".

The Muslim Council of Britain accused him of "pandering to the far right".

Structure of reports (by paragraphs)