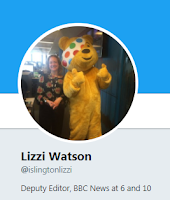 The Corbynistas suddenly found out something I've known for years: that Lizzi works for the BBC. She used to work on Newsnight but is now Deputy Editor of BBC News at Six and Ten. So they moved on from attacking (Jewish) Margaret Hodge to attacking her (Jewish) daughter, mobbing her with tweets. Their 'reasoning' for such behaviour? Well, as one tweeted, "The daughter of a key player in the whole smear can’t report impartially."

Isn't that a bit North Korean, you might also ask (punishment of the whole family for the 'crimes' of an individual)? No, apparently, because it shows "nepotism" and "a conflict of interest", replied the Corbynistas (whilst continuing to bombard BBC Lizzi with demands):

Lizzi Watson, given your role at BBC News, concerned citizens would like to know if you are the daughter of Margaret Hodge. If this is indeed the case, the coverage of the Hodge-Corbyn debacle potentially raises serious conflict of interest issues that you must be aware of.

Nonsense, others countered, pointing out that Ms. Watson doesn't work for her mum and, in fact, has a completely separate career at a completely different institution and there's no direct proof whatsoever that Lizzi Watson has in any way influenced the programmes she works on to be biased in her mother's favour against Jeremy Corbyn.

Ah but, replied the Corbynistas, there is proof because "Margaret Hodge has had such a wide platform to smear Jeremy Corbyn" and that must be partly down to the influence of her daughter....

....which, of course, is mere smoke-without-fire stuff. Accusing someone of being biased and unprofessional without providing the slightest bit of concrete proof is itself a smear. (Also correlation does not imply causation).

Lots of BBC people and non-BBC people meanwhile have rushed to defend Ms. Watson, saying that she's one of the nicest people they know and is scrupulously impartial.

Like the Corbynistas, I've no evidence one way or the other about whether she's impartial or biased but unless the Corbynistas can tie her personally to a piece of provably biased, provably bad reporting about Mr Corbyn (preferably involving her mother) then the BBC's Lizzi Watson remains simply the victim of a smear campaign here, and one with rather sinister undertones.
Posted by Craig at 12:22