...necessitates a transcription of the offending piece: 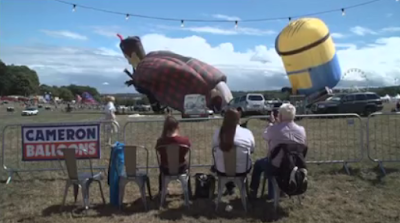 Kirsty Wark: "We're not asking for a second referendum". That is Jeremy Corbyn's stated position on Brexit, but there is evidence of support amongst Labour voters for just that. In the latest poll by YouGov published today a majority of Labour supporters are in favour of A People's Vote. There are also senior figures in the parliamentary party who disagree with Jeremy Corbyn - Chukka Umuna for one, a leading supporter of People's Vote UK, and the Shadow Brexit secretary Kier Starmer is not ruling out a second vote on the final deal either. There are also reports that hundreds of constituency Labour parties are planning to pressurise the leadership at the party conference next month to back another referendum. John Sweeney has spent the day in Bristol - the location tomorrow for the first in a new series of second referendum rallies.
John Sweeney: Where better to unpick Labour's stance on a second Brexit vote than a hot-air balloon festival? Welcome to Hollywood. Sorry, Bristol. So, in the south-west, as in the rest of the country, people's views are shifting in favour of a second vote on Brexit - what the La-Di-Da Gunner Graham types called 'the People's Vote' - and that spells trouble for Jeremy Corbyn and his vision of a workers' Brexit. Time to take to the skies for a bird's eye view of Bristol's take on 'Wither Brexit?'.

Balloonist: We got a tangle. So we'll have to pull it down, put the parachute back in,  start again.

It's kind of like Brexit, isn't it? So things aren't working out quite as smoothly as we had hoped. That is not any of these people's fault. That is something called the British weather, which is being annoying. So this is a cracking metaphor for Brexit, because, frankly, it hasn't worked thus far. Now, had I been able to go up in the balloon, I would have said the following: That the issue for Jeremy Corbyn and his management of Brexit vis-à-vis the Labour Party is not that there has been too much hot air, but none at all, thus starving the debate of oxygen. Where do the balloonists and their fans stand on the great debate?

That's our unscientific take from the public. But what about Labour? A poll out today found 63% of Labour supporters back a second vote, compared to 18% who oppose it. The don't knows, 19%. Ed Miliband's former spin doctor is leading the second vote campaign:


Tom Baldwin, People's Vote UK: We are detecting signs in the Labour Party, from the leadership,  from MPs, right across the party, from trade unions, that they are moving towards a people's vote, because that's the way out for the Labour Party. It's in a wrong place with its voter. It's out of kilter. That's the biggest dysfunction of British politics today.

One reason a second vote might not happen is that 60% of Labour MPs represent constituencies that voted Lave. Here in Bristol, the People's Vote will be holding a rally tomorrow to push for a second referendum. Will Bristol East's MP Kerry McCarthy be joining them here in Colton Hall {sic}?


Kerry McCarthy MP: Well, I wasn't invited to tomorrow's event. There's been a lot of debates in Bristol recently that have all been sold out, huge numbers of people coming, so there is clearly a lot of interest. I'm slightly worried that everyone is putting their eggs into the People's Vote basket, and I think we have a long way to go before we are in a position where we decide that that is the option to go for. We are very worried about what Brexit would mean, and I can see why they would be pinning their hopes to a people's vote, but it's quite a high-risk strategy. There is always a danger that they wouldn't get the result they wanted.

But Team Corbyn's coolness on a second vote doesn't cut the ice with these two Labour loyalists:

On a second Brexit vote, Jeremy Corbyn may well win in the end. But he might find his balloon gets popped along the way.
Posted by Craig at 15:29