It's interesting that Jeremy Corbyn's latest difficulties have made the Top 5 stories for both the Sky and ITV news websites: 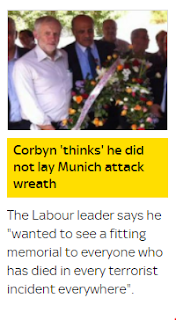 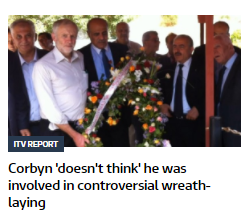 ...and yet are nowhere to be seen on the BBC news website's home page, or even on the BBC's Politics page.

This mirrors something I observed over the weekend via TV Eyes...

Jeremy Corbyn was in trouble on Friday night for a speech comparing Israel's actions to the Nazi occupation of Europe and then from Saturday morning onwards was in the eye of a storm over his actions in Tunisia  four years ago.

Sky News devoted considerable attention to both stories over the weekend, beginning on Friday evening with hourly reports, occasional interviews and extensive discussions on the evening's paper reviews. The coverage continued prominently every hour throughout Saturday morning and Saturday afternoon. After a lull on Sunday evening Sunday night's paper review focused on more revelations about Mr Corbyn's actions in Tunisia and the story has again been a main story hourly throughout the day today. TV Eyes listed 84 separate mentions of Mr Corbyn's travails on Sky News from Friday evening to now (late Monday afternoon).

In contrast, TV Eyes lists a mere 12 separate mentions on the BBC News Channel. The BBC was silent on Friday night on the breaking news about the speech comparing Israel's actions to the Nazi occupation of Europe and the Daily Mail's headline story about the wreath ceremony in Tunisia was only mentioned and not discussed on The Papers that night. A handful of passing mentions on other papers reviews on Saturday and Sunday and Monday morning sufficed for the rest of 'the coverage', with Sunday night's The Papers again just mentioning the Mail's latest headline (and saying "the Mail continues its attack on Jeremy Corbyn"). Only at 2:21 pm this afternoon did the BBC News Channel finally turn in earnest to events in Tunisia when a BBC reporter (Jonathan Blake) gave a story summary of the story and played clips of Jeremy Corbyn's self-defence. This has been repeated hourly since.

The contrast between the two rolling news channels here is very striking indeed. One has given both stories extensive coverage, the other next to no coverage.

It makes you wonder: Have the constant attacks from the Corbynistas got to the BBC? Are they now running scared? Dare they report bad news about Jeremy Corbyn anymore (except, perhaps, for criticism of his position on Brexit)?

P.S. Others have noticed:

Update: And here it (finally) is, appearing just underneath a report headlined 'Streamer Ninja won't play with female gamers':

Comments on this SKY Twitter thread aren't going well for Corbyn. (Look at the eyes)

Jeremy Corbyn has admitted he was present at a wreath-laying memorial for Palestinian activists thought to have been behind the murder of Israeli Olympic athletes in 1972.