According to The Times:

The BBC no longer wants TV shows in which white, middle-aged men stand up and explain things, according to one of the corporation’s senior executives.

Old-fashioned programmes that feature individual presenters imparting their knowledge of a subject to viewers are too “static” and no longer excite audiences, Cassian Harrison, editor of BBC Four, told the Edinburgh Television Festival yesterday.

He said controllers of other channels, including BBC Two, had also taken against the outdated presenting format. “There’s a mode of programming that involves a presenter, usually white, middle-aged and male, standing on a hill and ‘telling you like it is’. We all recognise the era of that has passed.”

As Iain Martin of The Times has quipped: "That's the end of David Attenborough, then." (Not middle-aged though, so might be OK).


More seriously, as Ben Cobley, author of The Tribe, has written: "As the BBC embraces the politics of diversity, its sense of purpose and role in our national life have evolved into something quite different from what they used to be. What is happening to the BBC is happening all across our institutional life as priorities shift from producing work to representation".

All of this is a great shame as I've long been looking forward to the day when Cassian himself presented something on BBC Four (hopefully while walking up a hill), and now that's not looking likely... 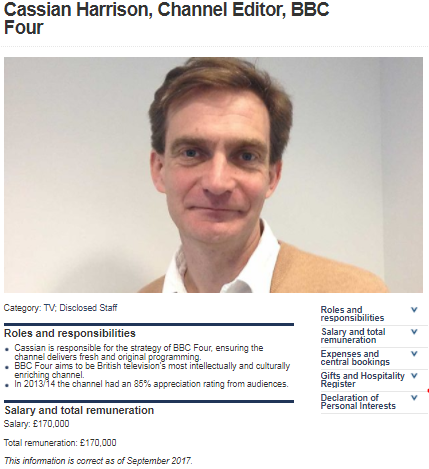