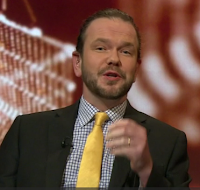 The general point behind this tweet is, surely, a perfectly reasonable one:

James O'B himself was back on Newsnight last night and didn't very too hard to disguise his left-wing views (as usual).

It was perfectly predictable, for example, that during the interview with a Tory backbencher and a Labour frontbencher he'd let the Labour MP talk at length without interruption but challenged, and repeatedly the Tory backbencher.

Less predictable - and quite extraordinary - was the near 40-second LBC-style rant he inserted as a question to the Tory backbencher midway through the joint interview (complete with bizarre moments of emphasis):

Osborneomics, Heidi Allen, I mean, that is the most busted of busted flushes, isn't it? I mean, the whole idea was that the deficit was absolutely crucial, that driving down the debt was the driving force of the entire project. Six years in 11 Downing Street and now his predecessor [sic] has given up on it. What do you say to the people you care so much about who have had wage freezes BECAUSE austerity was the answer to the deficit, WHO perhaps have lost their jobs in the public sector BECAUSE austerity was the answer to the deficit? People who have genuinely been squeezed or jammed, or whatever you want to call them, as a DIRECT result of the policies that your party enacted?

Labour's Chi Onwurah got nothing like that (or even a single interruption).

He then asked (pro-Remain) Heidi Allen, after she'd made an anti-Brexit dig, if her colleagues who campaigned for Brexit had "actually caused the poor, at least in the short term, to suffer more"...a typical leading question from a well-known anti-Brexit, left-wing LBC broadcaster. 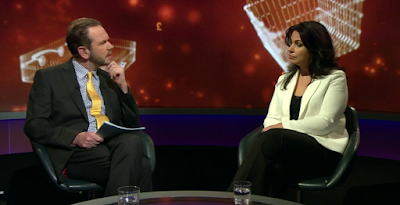 It was also predictable (given that he's so hostile to Brexit) that he'd begin the Brexit segment with some point-scoring, which he duly did:

They called it Project Fear during that Referendum but there are signs now that some of the warnings of post-Brexit trouble could be crystallising into Project Fact. Credit Suisse published its annual global wealth report today and estimated that Britain is $1.5 trillion poorer in dollar terms due to the fall in the pound since the vote to leave the European Union. But even if you are one of those people who don't trust experts it's hard to see a number of that magnitude - my 10 year old tells me there are 12 noughts in a trillion - in the context of our day-to-day existence. Much closer to home Newsnight has been told that because of the value of sterling food prices are likely to rise by more than 5% over the next 6 months. Adam Parsons has the story.

Bring on Iain Dale, or anyone of equivalent stature from the pro-Brexit Right, to balance this kind of thing, Mr Katz, or risk being regarded as hopelessly and irredeemably biased (if you care about such things).
Posted by Craig at 16:52