From Nick Bryant on BBC One's News at Six, however, I learned that the other word to use alongside "controversial" is "hardline". (Nick used it three times within the space of 38 seconds.)

And it's the word the BBC News website favours too in its variant form "hardliner". Its main headline reads: 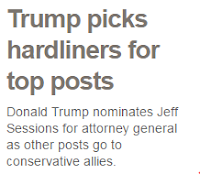 ...and the main article begins by saying, "Donald Trump has named more conservative hardliners for key posts". Further down the same article we find Anthony Zurcher beginning his 'analysis' by saying, "The Trump administration is taking shape, and so far he is filling the top slots with men who are hardliners, close allies or both".

That article (as David Vance noted at Biased BBC) might also be accused of going low when it could have gone high in its fourth paragraph by making it a matter of global importance that ex-KKK grand wizard David Duke has tweeted in praise of the appointments (nudge, nudge, wink, wink):

Nick Bryant's BBC One report - also not exactly free from 'dog whistle' nudging like that (eg. the "Deep South state of Alabama" bit - see below) - was striking for not giving us any positive reasons why Mr Trump might possibly have chosen Lt-Gen Michael Flynn as his National Security Adviser or Alabama Senator Jeff Sessions as Attorney General. Do these men have no accomplishments whatsoever (other than being racist Islamophobes)? All we got was this:

This is America's next National Security Adviser, Gen Michael Flynn - a retired intelligence officer whose views on Muslims have been accused of being Islamophobic. In a speech this summer he likened the world's second largest religion to a malignant cancer.

Donald Trump's choice of Attorney General is just as controversial: Senator Jeff Sessions for the Deep South state of Alabama who had to withdraw from consideration for a federal judgeship in the mid-1980s after being accused of making racist comments, allegations he's always denied.

You would think from this that the BBC doesn't like these appointments one bit but, as we all know, the BBC is impartial so that cannot be!


Of course, the BBC isn't alone in this. Non-licence-fee-enforcing ITV, for example, is up to the same thing. Its latest online article begins, "Donald Trump's latest appointments to his administration have fuelled the fears of civil rights groups - but delighted the former head of the Ku Klux Klan and neo-Nazis."
Posted by Craig at 21:17