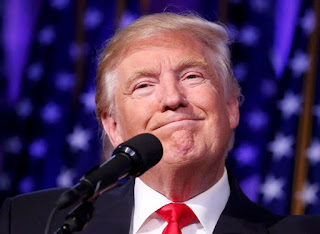 "The BBC has fought a very long, very hard and very divisive campaign over a long period of time yet we owe it a major debt of gratitude for its service to our country. I mean that very sincerely. Complicated Business.


Now it’s time for the BBC to bind the wounds of division. To all the Guardianistas, Labour Party  members and people who read the Independent - across this nation, “Is The BBC Biased?” says it is time for us to come together as one united people.

It’s time.
Time for the BBC to pledge to every citizen of our land that it will be a broadcaster for all British people.

As soon as we saw that The Donald had reduced the size of his quiff we knew that there must be a reasonable side within.  Oh how we laughed at the idea of B movie star Ronald Reagan as POTUS.
Emily Maitlis very  graciously held her hands up and announced that ‘we’ got it wrong, every time’.
Laura Trevelyan called Trump’s speech “Reaganesque”  and proudly announced that today she is becoming an American citizen.

"The BBC may not have supported all of us in the past, but it’s time to reach out to us for our guidance and our help so we can work together and unify our great broadcasting corporation.


One in particular, narrated by Aleem MaqBool, is particularly embittered.

Matthew Amroliwala was busy being alarmist about the ftse. It plummeted, according to him. Which, of course it did not.

You can’t blame them, can you. Their candidate lost.

Poor Theresa May gave such a robotic statement to Sky News. We'll all have to practice carefully enunciating ‘President-elect Trump’.
Posted by sue at 20:46