Wonder why you don't say to those people, "Wouldn't you like to think again about Brexit?" 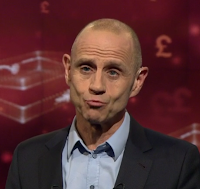 As I was driving to work this morning, the 7:40 Today paper review made me laugh out loud.

Nick Robinson: Time for a look at the papers though. They appear to have been listening to two very different Autumn Statements yesterday. At the Guardian, very much in the Remain camp of course, it was all about the cost of that Brexit decision: £59 billion, it said, is the black hole cause by the vote to leave the EU. "Britain's biggest foreign policy blunder", says the leader column. "The the self-inflicted wound of Brexit is going to hurt". The accompanying cartoon has Philip May and Theres...Philip Hammond, I'm sorry, and Theresa May as down-and-outs scavenging in bins.

Justin Webb: In stark contrast Mr Hammond is pictured with a broad smile on the front of the Brexit-backing Daily Mail, which celebrates his predictions of growth with the headline, "So much for Mr Gloomy!". "The elite said Brexit would spell apocalypse," it said, "but the strength of the economy has confounded Remain doom-mongers." The Mail does admit to deep reservations about the terrifying national debt but in the view of its sketch writer Quentin Letts "Mr Hammond was by his own morose standards almost skittishly optimistic",

The reason I'd laughed out loud was because I'd watched yesterday's BBC One News at Six and seen last night's Newsnight, and both progammes - especially Newsnight - had taken exactly the same approach as that of the Guardian, as outlined there by Nick Robinson. It was overwhelmingly about doom and gloom and about how Brexit is to blame from the BBC. Optimism, skittish or otherwise, barely got a look in.

And Nick, quite rightly, had explained the Guardian's response in terms of it being "very much in the Remain camp". So where does that place BBC One's News at Six and Newsnight then, given that their reporting was almost identical to the Guardian's? (Answers on a postcard to Polly Toynbee).

From all that I read yesterday it is definitely the case that "Brexit-backers" tended to note the fact that the OBR and the Chancellor had spelled out that UK growth would continue and would be wholly back on track by 2019 (when we should have left the EU). So no apocalypse after all. The optimistic employment projections were also picked up on, among other things. It was also definitely the case that the "Remain camp" on Twitter and in the press focused on the potential negatives of Brexit, including the lowering of the growth prediction for 2017. Watching both last night's BBC One News at Six and Newsnight it was striking how the official predictions that economic growth would be back on track by 2019 didn't get a mention.
******* 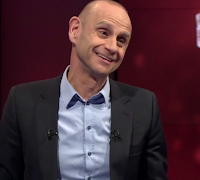 As so often (these days), however, Newsnight was particularly aggressive in pushing the Guardian/Remain camp line that it's all Brexit's fault.

The assault was led by Evan Davis (though Nick Watt also did some gloating about 'the revenge of the experts').

Evan's interview with (Remain-backing) Conservative Treasury minister David Gauke began with the following questions (which have to be read to be believed). These are not 'impartial' or 'devil's advocate' questions:

- This 2.4% shrinkage in the economy relative to if we'd voted to remain in the referendum, is this the kind of figure that you think is reasonable, a sensible figure to be planning for?

- I mean, it's not that out of line with what the Treasury was saying the cost of Brexit would be before the referendum and everyone said that was "Project Fear". I mean, you must feel to some extent a little bit vindicated by seeing the OBR - completely independently, nothing to do with the Treasury work - come out, look at it again after the referendum and come up with a figure that wasn't quite as pessimistic as the Treasury one but in the same ballpark?

- And, obviously, some of your colleagues are saying this is too pessimistic. Some of them have had less kind words about the OBR - "Oh, these guys are Remainers" and, you know, all of that kind of stuff. Would you just tell them to "Shut up! We have to accept what the OBR says"?

- One of the very striking things about it is that if you want to the JAMs - the Just About Managings -, if you want to help the people who aren't even managing, Brexit, if we believe the OBR, swamps everything you're doing, doesn't it? You can tinker round the edges but there's this bloomin' great 17 billion or so...15 billion...caused by Brexit which is so much more significant. Wonder why you don't say to those people, "Wouldn't you like to think again about Brexit?"

Mr Gauke said the the public had voted and it's no good picking over old scabs. I doubt that Newsnight will pay the blindest bit of attention to his wise words here! 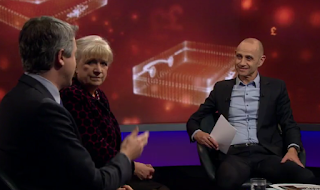 Newsnight's closing panel discussion on the Autumn Statement also dwelt quite a bit on Brexit.

Typically, the panel consist of two Remain backers (Polly Toynbee and Rupert Harrison) and just one Leave backer (Stephen Glover) - par for the course for Newsnight.

Also typically, Evan Davis challenged and interrupted Stephen Glover of the Daily Mail significantly more than the others (making it seem as if Stephen was in the dentist's chair) whilst giving underarm questions to the Remainers.

By no stretch of the imagination could this be called 'fair' interviewing, despite Evan's casual style during the discussion. He sided with the pro-Remain majority (on the panel) here.

T'wis ever so at the moment on Newsnight.

So, to cheer us all up, here are a couple of beautiful pieces of music: