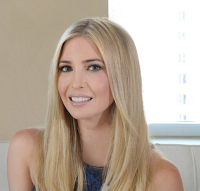 The US magazine Slate tells the story of how "even those outlets that pat themselves on the back for being the serious voices in an Internet filled with fakes and anonymous sources can still fall prey to fake news in the desperate search for clicks".

One of the fake stories doing the rounds in recent days was Ivanka Trump's "response" to her father's quip that he would date her if she wasn't his daughter: "If he wasn't my father, I would spray him with Mace”. The problem is that she never said it. It appears to have originated in a joke from a comedian in 2006.

Still, that didn't stop certain US media outlets, including the Hill and the New York Daily News, from reporting the story in recent days.

And, as DB spotted, it didn't stop the face of the BBC in the US - Katty Kay - from retweeting it either:

She must have so wanted to believe it.
Posted by Craig at 20:30