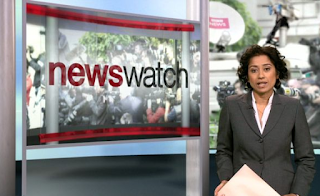 Twitter saw an interesting contretemps this morning between Samira Ahmed and Justin Webb.

Justin had been interviewing Joel Pollak, senior editor-at-large of Breitbart News, and things had got heated with Mr Pollak accusing Justin of making "inflammatory...libellous and defamatory" statements about Breitbart and Steve Bannon.

Here's a (tidied-up) transcription of what followed between the Newswatch host and the Today presenter on Twitter:

Samira Ahmed: Do news organisations understand how to prepare for  giving airtime to the alt-right? Don't think so. Breitbart interview on #R4today 710am. It's as if news organisations have learned nothing from all those years of giving Islamists easy airtime. Eg Anjem Choudary. Not about censorship. About careful research, not acting superior or arrogant. Put them on with challengers not a solo spotlight. Maybe prerec.

Justin Webb: Not sure I acted superior or arrogant Samira?  How so?

Samira Ahmed: You seemed unprepared for how he responded.  I admire your calm, Justin, but he was in control of that whole interview.

Justin Webb: I think you misunderstand interviewing. They reveal. Not about smackdown.  He had every right to say what he did.

Samira Ahmed: We don't disagree on what you're trying to do Justin. But I've had these arguments at C4 news too. Free PR isn't enlightening.

It's notable that Samira places Breitbart and the alt-right on the same level as Islamist radicals - as extremists. Shortly after the above she tweeted this:

Maybe she should interview herself about all of this on Newswatch. The interview would probably go like something like this:

Samira Ahmed: Samira, if I can just read out a complaint from one of our viewers on Twitter:

What would you say to that? Ought you to have commented in such a fashion?

Samira Ahmed: Well, Samira, I have to say - having giving it some consideration - that I think, on balance, that I got it about right.

Samira Ahmed: Samira Ahmed, thank you for coming into the Newswatch studio to talk to us today.

Samira Ahmed: Thank you for having me.