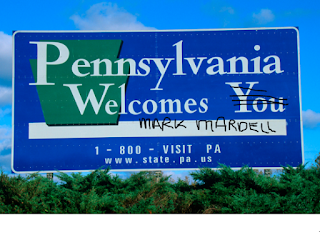 The recent news that the BBC is cracking down (for cost reasons) on well-known presenters flying off on foreign jaunts to cover big stories and, instead, confining them to carrying out “two-way” interviews from the studio with correspondents on the ground doesn't seem to have reached the offices of The World This Weekend.

BBC 'frequent flier' Mark Mardell managed to wangle himself a BBC-funded trip to Washington and Pennsylvania this week.

The reason for going to Pennsylvania? To attend a family's Thankgiving dinner and talk Trump over the turkey.

That's nice for him.

The focus of his report was on the 'divided nation'/'divided family' question. He talked to supporters of both candidates (though disgruntled Democrat supporters predominated).
Posted by Craig at 14:02