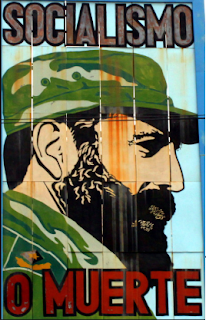 Leading the news on Today this morning was the following 'breaking news':

The Cuban leader Fidel Castro, a towering figure of the Cold War who became a symbol of revolution and defiance, has died at the age of 90.

The BBC's world affairs editor John Simpson then gave us his assessment of Castro's legacy:

With Castro's passing an entire aged has died. Like the cars and buildings of Havana, perfectly preserved from the early 1950s, Castro represented an unaltered line of resistance, not just to Americanism but also to most of the changes which have swept through our world - from the collapse of Marxism-Leninism to market economics and the fostering of civil society. Inevitably, Castro was far more popular outside Cuba than he was at home. For the world he was a magnificent figure defiant in his loneliness. Large numbers of Cubans found the isolation and the dogmatic refusal to change deeply wearing. Most would have have liked something less heroic and most basically satisfying. He let his supporters down continually by assaults on freedom of speech and action, yet he turned Cuba from being a nasty, corrupt dictatorship to a proud and in many ways more decent society. To meet him, as I did, was to get a taste of the impossible glamour which surrounded him. Whether Cuba will now be a better place is far from clear but the world in general is certainly poorer and more ordinary without him. 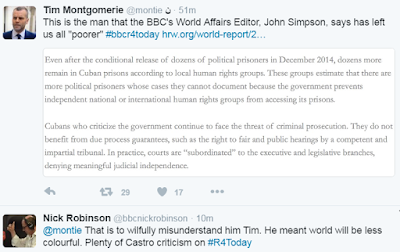