I drive to work yesterday morning yesterday morning listening to Norman Smith hyperventilating on Today about a leaked memo from an unknown consultant that had been prepared for the cabinet office and which was absolutely devastating about the government's readiness for Brexit. The BBC had "seen" the memo, which had been 'leaked' (or given) to the Times, and was leading with the story. By the afternoon, however, the story had fallen apart with Deloitte issuing a statement: 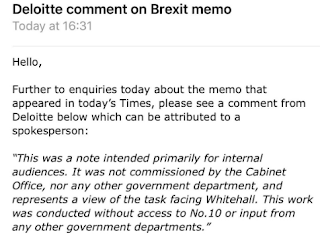 It turned out to be purely a point of view from a company that had opposed Brexit making a pitch to the government. As Andrew Neil tweeted, sarcastically:

The BBC, following the lead of the Times, had got it wrong. Don't they bother checking stories any more?
Posted by Craig at 06:34