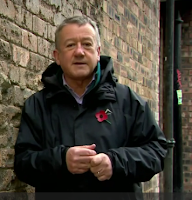 While we're on that Who's Won the White House? BBC One special tonight...

There was bleak, threatening mood music accompanying an item by pro-EU BBC veteran Allan Little, and his piece didn't hesitate to draw links between the "fear" felt by Trump supporter and Brexit supporters ("from western Pennsylvania to Brexit Britain") or to make some familiar 'Remoaner' points:

It is a revolt too against governing elites - people perceived to have done well out of the globalised economy.

And that distrust has walked hand in hand with a revolt against expertise.

It has brought a new age of post-truth politics - first, public scepticism towards the glib and oily arts of political spin; now a widespread disregard for evidence.

The Brexit campaign promised £350 million a week available for the NHS. It wasn't true but it didn't matter.