I watched the programme about Christie’s auction house the other day. It just shows how appalling the art market is. A bunch of people with more money than brains being bamboozled into spending great wads of it while funding the lifestyles of another bunch of jumped up salespersons who know next to nothing about the subject they’re pretending to know about. They all seemed to be winging it. Well, they know about selling; just not about art.

I did enjoy those Arab princes squandering zillions of their unearned wealth on a pile of pretentious junk though. Probably more harmless than coming to London to show off their ridiculous cars. 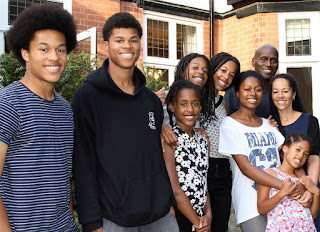 Unfortunately I didn’t look at the schedules and missed the BBC Four documentary about the  Kanneh-Mason family and their 17 year old son Sheku, the winner of BBC Young Musician 2016.
I caught up on iPlayer, and I enjoyed it bigly. They are an amazing family, every single one of them is good looking, hardworking and extremely gifted.
The documentary did leave me with certain questions, as Marina Vaizey has articulated here:

“The story had some fascinating omissions. The father, Stuart, worked away from his Nottingham home Monday to Friday but we were not told what he did; was the family always Nottingham-based, and how and when did classical music become the centre of all their lives?”

What a pity this programme was on BBC Four rather than One or Two. It wasn’t particularly elitist or highbrow, and the fact that it involved such cool children and teenagers made it an ideal taster, or vehicle, for sparking a wider interest in classical music. Programmes that emphasise the importance of hard work, determination and training are usually confined to documentaries about elite sports like swimming or gymnastics and I see no reason to hide away a film with a similar theme on BBC Four.

Last night I was really really tired. Couch potato tired. Our new BT remote control only seems to work if you get off your arse and fire it directly at the TV from point blank range - not very remote if you ask me - so I failed to execute my lightening response to the warning wail of impending EastEnders. Consequently I sat through it all. OMG. Do people really and truly watch this?

Who are all those identical blonde actresses who seem to be emotionally connected to Phil Mitchell and where are they flocking from? Phil has learned he’s probably gonna die before he can get a liver transplant. His acting technique, which involves delivering his lines through heavy “back-of-the-throat breathing” has developed a lot since I last watched EastEnders and now his lines are all but inaudible. He does act irritability pretty convincingly, if you like that sort of thing. (What’s the betting he gets his transplant before he dies?) Anyway I won’t be sticking around to find out.

I don’t know if putting new batteries in would help. (In the remote, not me; though, come to think of it…)  It seems like only yesterday that I replaced them, but surely… isn’t battery life a binary thing?

Anyway, since this has turned into a review, I must mention the Today Programme on “Health tourism.”   The Website:

“Hospital patients could soon be asked to show their passports before they're seen. A senior Department of Health official confirmed yesterday the government is considering introducing the ID check nationwide to tackle so called ‘health tourism’. Professor J Meirion Thomas is a former cancer surgeon at the Royal Marsden Hospital in London and Dr Mark Porter is chair of the British Medical Association.”

It was an interesting discussion. Professor J Meirion Thomas, a former cancer surgeon at the Royal Marsden Hospital in London defined health tourism as people with pre-existing conditions coming to Britain from overseas to take advantage of free NHS treatment. He set out a list of abuses, particularly maternity cases; the problem being that once they’re here, they’re here. Heavily pregnant ladies can’t be deported by air as no airline will take them.
It morphed into a political broadcast on behalf of unlimited access to the NHS at the point of sale, and free access for all who need it.
Many questions were left hanging. The first thought that occurred to me is what happened to our National Insurance numbers? Aren’t we all registered on some NI database? I suppose some incompetent NHS employee has put the file in the wrong pigeonhole. Surely NHS numbers are a better form of ID than a passport and a utility bill?

Chair of the BMA Dr. Mark Porter’s argument against the motion seemed to be based on the principle that making genuine NHS beneficiaries carry ID was an erosion of personal liberty, and a disproportionately heavy-handed remedy for the relatively small cost of health tourism. The amounts of money involved were so large, he went on to say, that being obliged to carry ID amounted to a sledgehammer to crack a nut. John Humphrys reminded him that it was quite a considerable nut and every little helps.

Apparently existing rules are already in place, but are not being enforced. I don’t know what the rules are about foreigners’ access to the NHS, and how and when they are expected to pay for it, and I would have appreciated someone explaining it to me properly.

I had a mental image of Nigel Farage being roundly condemned, nay, virtually crucified for mentioning people with pre-existing conditions abusing the NHS. In particular, those arriving here with HIV. What’s the difference? I wish John Humphrys had been a little more persistent.  I wanted to hear Dr. Porter explain how the NHS is supposed to cater for health tourists, especially at a time when the BMA (whom he represents) is angling for more money for junior doctors for working through weekends and all. Calling for strikes one minute, and offering freebies for all and sundry the next does not compute.

A little later in the programme there was an item about the dire conditions in Aleppo. Because of the similarity between these reports with reports from Gaza in 2014, my sympathy was tinged with cynicism. They brought on Dr. David Nott who is quite a celebrity these days. http://davidnottfoundation.com/ He goes to war-torn hell-holes and performs surgery in the most unimaginable conditions, and very admirable that is too. However, and this is going to make me sound nastier than I really am, he got involved in actively blaming Israel for the plight of the injured children in Gaza, and his saintly persona gave his words undeserved credibility, and I can’t help wondering if his tendency to hold only Syria and the Russians responsible for what’s happening in Aleppo is as sound as it should be.
********

There. that’s me saying something controversial. Or is it? I have noticed that views like mine are not quite as unique as they used to be. Soon Craig and me will be redundant. We can sit back and smoke our pipes and (why not?) possibly  recharge our batteries.