Katty Kay, the face of BBC World News America and co-host (with Andrew Neil) on the BBC's US election night coverage has been shooting her mouth off again about Brexit on NBC's Meet the Press:

I agree on the Brexit thing. And I'm thinking about the Trump team this week because when I was in London during the Brexit vote, members of the Leave campaign went to bed that night thinking that they had lost and they woke up staggered the next morning that they had won. We did opinion polls afterwards that showed that, actually, if we were to hold the referendum again, Remain would win.

There were people who came on the BBC who said, "You know what? I voted to leave but I didn't actually think we were going to leave. It was a protest vote." And I think what we've seen during the course of this week is the kind of simple, clarion call of change crashing up against the complexity of actually governing.

What she said, of course, is simply not true: 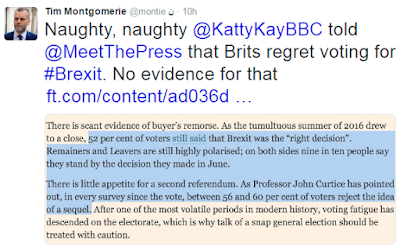