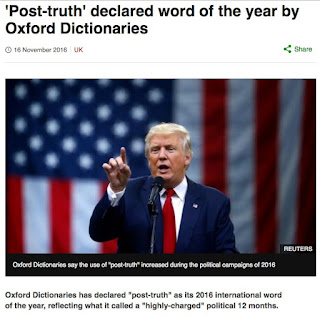 “Post-truth politics (also called post-factual politics) is a political culture in which debate is framed largely by appeals to emotion disconnected from the details of policy, and by the repeated assertion of talking points to which factual rebuttals are ignored”

This  is funny. The BBC boasting about ‘fakes debunked’. Oh! physician, heal thyself.

I’m no fan of Donald Trump (as it’s customary to declare before daring to question some anti-Trump hyperbole) but recently the BBC has abandoned impartiality almost to the point of recklessness. One small but typical example.

“Donald Trump has dismissed reports that his transition team is in turmoil” says Nick Robinson.

“It’s been described as ‘like a knife fight’ “ says Sarah Montague. “He’s defended the process, tweeting that it’s highly organised” she adds cynically.

In her interview with Mike Duhaime, senior adviser to Governor Chris Christie, Sarah Montague failed to coax one derogatory remark about Donald Trump from him, no matter how hard she tried. Presumably the BBC assumed/ hoped Chris Christie team’s tongues will have been loosened by a fit of pique. She tried several approaches from a variety of angles including insinuations of nepotism regarding his ‘orthodox Jewish’ son-in-law Jared Kushner, and sounded increasingly agitated at Mr. Duhaime’s refusal to play ball.

Today: another example from our friend Jenny Hill.
Justin Webb:

Are Germans looking forward to dealing with he next president? No, not much. Our Berlin correspondent Jenny Hill has been to the western town of Bamberg to find out why so many Germans are horrified by Donald Trump.

“Few here are cheering now”
“What he thinks about women and black people…”
“Germany will be sad to see Barak Obama go”
“Donald Trump’s victory was treated with widespread and undisguised horror here.”
“A nightmare.”

Jenny Hill represents the type of BBC correspondent, like our friends Fergal Keane and Yolande Knell, who pepper their reports with descriptive, conspicuously literary passages - the same tricksy technique that’s often used to romanticise Palestinians. Indirect emoting in the slippery way that the BBC is so fond of. Difficult to pin down but easy to spot.

Please see Craig’s transcript of Justin's interview with Joel Pollak which, had Craig not taken the trouble to transcribe, I would have done so myself.

Did you see that excerpt from Kirsty Wark’s interview with Yair Lapid on Newsnight? It was followed by Evan Davis delivering a rebuttal on Jeremy Corbyn’s behalf, straight from the Huffington Puffington.

“Jeremy Corbyn and the Labour Party are implacably opposed to anti-Semitism in all its forms and has a long history of strong support for and involvement with the Jewish community.


“As leader, Jeremy Corbyn launched the first major inquiry into antisemitism by any British political party.


“Labour supports a two state solution to the Israel Palestine conflict and to achieve it, Jeremy will continue to work with those on both sides of the divide to bring lasting peace.”

Don’t you just love that defence of the indefensible? “Jeremy Corbyn launched the first major inquiry into antisemitism by any British political party “  Why? because the Labour Party is the first major political party that has been publicly exposed for having the most openly expressed problem with Jews. Major inquiry my arse as they say in the armed forces. It’s laughable.

I missed much of the Today programme when it first went out this morning because I listened instead to the whole of the parliamentary debate on the Balfour declaration.  I see there are still a handful of members ready to defend Jenny Tonge. Well, Bob Stewart MP looks like a handful.

Andy Slaughter was there, doing his bit on behalf of the proPalestinian lobby.  Stephen Kinnock had his little rant about illegal settlements (and was told by the chair to sit down.)