We’re all guilty - to a certain extent - of cherry-picking certain sound-bites and using them endlessly when it suits. I‘m thinking of Jeremy Corbyn’s ‘friends’ and so on. (But in that case I believe Jeremy Corbyn did indeed call Hamas and Hezbollah ‘friends’ because he felt ‘friendly’ towards them, even if he didn’t necessarily count individual members as personal friends.)

No, I mean eg., quoting Trump saying he would “ban Muslims” from entering the states, without mentioning the “figuring out” part. (which obviously qualifies the whole thing and makes the statement look less radical)

By now you will be familiar with Andrew Neil’s  forensic debunking of the video which has apparently gawn viral,  because Guido has featured it, and no wonder.

For once someone at the BBC took the trouble to do their homework (unlike poor ol' Justin Webb) and collate the relevant qualifiers, which meant the allegedly incriminating soundbites slipped into context like the final pieces of a jigsaw. This neatly turned the tables, showing the co-director of Open Britain James McGrory and his video to be the disingenuous ones. 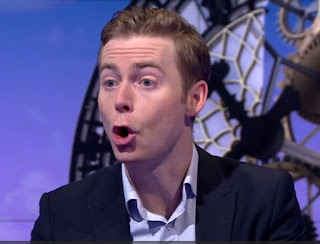 What struck me was the spluttering dumbfounded apoplexy McGrory was reduced to when confronted with the actualité. Open-mouthed Britain.
Posted by sue at 19:51