The world turns upside down on 'Dateline' 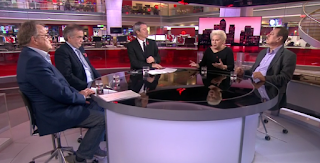 This week's Dateline London was surprising on many fronts (and highly enjoyable).

I expected it to be like every other BBC programme at the moment (slight exaggeration but not much!) and to be a tiresome festival of misery about the US election result with all the usual crowd wailing and gnashing their teeth and agreeing with each other from a shared left-liberal position. Not a bit of it, it turned out.

The range of views on Donald Trump was pleasingly diverse, with lots of positive things as well as negative things being said about his election and what it means. It was far from the usual Dateline consensus. Unusually, the range of views on Hillary Clinton was less diverse but in a most 'un-BBC' way, the general feeling being that she got what was coming to her.

More surprising too is that, for the first time in seven years of continuously monitoring this programme, the panel had a majority of right-wingers. (It's had majorities of left-wingers literally hundreds of time - and I do mean 'literally' in the literal sense there!).

There was a woman making an anti-feminist point and even a climate sceptic who denounced 'climate change' as a scam. Such things don't usually happen on Dateline (if ever).

The only unsurprising thing was Gavin Esler, who couldn't quite manage to shake off the BBC mindset (or mood) in some of his comments but, in fairness, he hardly got a word in edgeways for much of the programme.

Well worth a watch if you've a spare half an hour. You're unlikely to see or hear anything quite like it elsewhere on the BBC at the moment.
Posted by Craig at 14:08