After everything that's happened recently you might expect that some, especially on the Left, would finally give up trying to insult and silence 'unacceptable' people, given that their dogged attempts to do just that have plainly not worked  (so far) .

In fact, such attempts only appear to have made things worse for them by fuelling the anger of supporters of the very people they want to silence and, as a direct consequence, helping to bring about the very results they so wanted to prevent happening (UKIP getting 4 million votes, the Tories winning the last election, Brexit, and now Trump).

And yet, instead of considering that and changing tack, it looks as if the selfsame people are now simply going to ratchet up their old strategies of hatcheting people with labels and 'no platforming' them, and to keep on keeping on with their loud demands that 'unacceptable' voices be silenced - only doing so even more energetically than before.

There's been a huge Twitterstorm over the BBC's decision to interview Marine le Pen on The Andrew Marr Show this morning, coupled with a small protest outside Broadcasting House. Labour MPs have been involved, with Jeremy Corbyn adding his support. Doing so on Remembrance Sunday is particularly disrespectful of the BBC, they say (though a surprising number of them are combining such criticisms with sneering about people wearing traditional poppies). 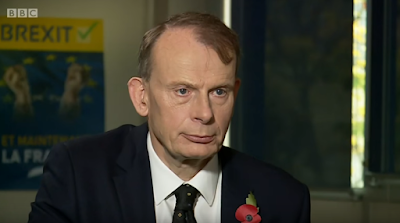 Randomly sampling such tweets suggests that, though the numbers have seemed huge, they've been overwhelmingly the same tiny minority of people who are always involved in this kind of Twitterstorm - people who see everyone from Marine le Pen to Nigel Farage and Suzanne Evans (yes, Suzanne Evans!) as far-right "fascists" and want them silenced, and who think that giving airtime to Trump got him where he is and giving airtime to UKIP got us Brexit, and that it shouldn't be allowed to happen ever again, starting in France with Marine le Pen.

The idea of crushing Mme le Pen in the arena of rational debate with the strength of their arguments still isn't proving a very popular idea with them it seems. It will doubtless be their loss in the long run, yet again, though.

Not that Andrew Marr came anywhere near close to crushing Mme le Pen through the strength of his arguments this morning.

The BBC itself, though refusing to bow to the Twitter mob, was remarkably defensive about the interview - which is most unlike them.

It started on BBC Breakfast with the presenters making it clear how "controversial" the decision to interview the FN leader was and BBC statements being read out justifying the decision.

And Andrew Marr himself also felt the need to preface his interview by issuing a 'trigger warning' (while sticking to his guns):

Now I know this morning some people are offended and upset that I have been to interview Marine le Pen and that we're showing this interview on Remembrance Sunday. I understand that, but I would say this: Le Pen could, under some circumstances, become the next French president in the Spring. This week, in the immediate aftermath of the Trump victory, she's declared that the whole world has changed and that her brand of politics is on the march. What does that mean? In the end, we are a news programme and I don't think the best way to honour the fallen is to fail to report on the next big challenge to Western security.