Did Jenny Hill compare Donald Trump to the Nazis?

I've read plenty of comments (on several sites) in recent days about a BBC News website piece by BBC Germany correspondent Jenny Hill on the German reaction to the election of Donald Trump: 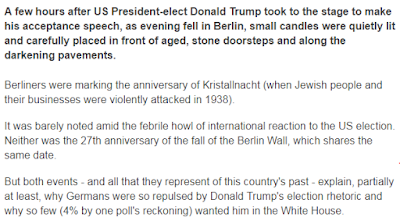 It's the implicit linking of Donald Trump to the Nazis there that has aroused people's anger. Many find it outrageous.

It certainly looks outrageous. The question about Jenny Hill here then is: Was she making that link or merely reporting it?

In other words, it would be absolutely fine for a BBC reporter to explain why Germans are reacting so badly to the victory of Mr Trump if, in the course of her reporting, she finds lots of Germans making that Kristallnacht/Trump victory parallel (however far-fetched others may find the comparison). If she has quotes from such people saying that very thing then all the better.

The worrying thing about this article, however, is that Jenny Hill, having made that highly provocative link in the first four paragraphs of her piece, provides no evidence whatsoever that people in Germany are actually making such direct comparisons, and she gives us no direct or indirect quotes to show that she's merely reporting what people in Germany are saying rather than giving her own view.

Please read it for yourselves. What do you think?
Posted by Craig at 17:17