The road to somewhere 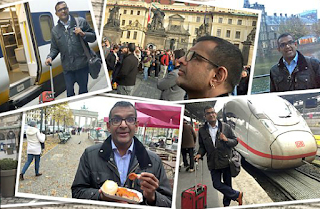 As regular readers of ITBB and News-watch will know, Radio 4 has taken BBC bias to a whole new high in recent months over Brexit (well, at least until their Trump coverage came along and took it even higher!).

Apart from a couple of pro-Brexit editions of A Point of View (on 12 and 13 July), the channel has offered no other pro-Brexit programmes whilst offering countless anti-Brexit programmes (including major, authored documentaries about Brexit from David Aaronovitch to Gary Younge and Gus O'Donnell). The bias has been off the scale.

The trend continues. This week's Analysis was a Brexit-related edition and, inevitably, a strongly pro-EU presenter was chosen - namely blog favourite Anand Menon of UK in a Changing Europe.

He expanded on his Saturday From Our Own Correspondent piece and made it even worse, much worse.

The message could hardly have been clearer: Because of Brexit we're on a road to nowhere. (The programme's recurring musical accompaniment was Road to Nowhere by Talking Heads).

Everyone who matters in EU country after EU country (excepts for those nasty populists) will make sure the UK suffers, all with the full backing of their national publics.

We're doomed, doomed! And Anand sounded intensely relaxed about breaking all of this bad news to us.

I bet this is going into the Brexit Collection. They really aren't going to offer positive programmes about Brexit any more. John Gray and Roger Scruton on a pair of one-off A Point of Views seem to be all we'll ever get from Radio 4, positive-wise, about Brexit.

Here's how Anand closed his Analysis:

ANAND MENON: So normally, in a program like this, I’d now reflect on the range of views we’ve heard. But what’s been really striking for me on this journey is that the message from all four countries that I visited was so consistent: ‘We’re sorry you’re going, it’ll hurt us too, but the integrity and the future of the EU are our priorities now. Regret mixed with resolve.’ True – there are 23 other member states who will all have a say, but nothing I’ve heard suggests they’ll adopt a dramatically different approach. The EU’s remaining members are as one on protecting its core principles, even if they have different ways of expressing love you.  So, we Brits have to sit on our blisters, we’ve got to choose the butter or the money from the butter, we have to eat the soup we cooked, and lie in the bed we made. EU countries are not currently prepared to bend the rules to give us a special deal, even if it makes economic sense for them to do so.  When it comes to ensuring the EU’s future, politics is winning the day. There’s a long time to go before the negotiations start, let alone end, many talking heads to debate our final destination, but, for the moment at least, the picture seems all to clear:
SONG: We’re on a road to nowhere.

BBC Radio 4 clearly wants to be on a road to somewhere...namely keeping us in the EU forever.

P.S. Miles Gosnett at Heat Street heard this Analysis the same way that I (and others) did. In fact, his piece quotes exactly the same passage I quoted. (He got there first, but I wasn't copying!). "The programme was hardly a balanced view of where things stand post-Brexit, whatever the BBC claims", he says, accurately.

He also tells of an interesting, baffling exchange with the BBC over whether James Harding voted Remain on 23 June.
Posted by Craig at 17:23