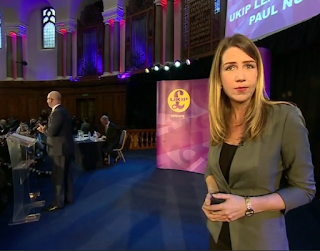 I probably need your advice on this one. What do you make of this?:

There was a curious moment on BBC One's News at Six - which led with Paul Nuttall's election as leader of UKIP - when the BBC's reporter, Alex Forsyth, said this of the new UKIP leader:

The former history lecturer grew up in Liverpool. He's been a UKIP MEP for the North-West as well as the party's deputy leader. And he holds some right-wing views. He's a climate change sceptic who's tough on crime.