My mother had a habit of breaking into song prompted by a random word or phrase that happened to pop up in the conversation. Eventually we turn into our parents, and now I’m doing the same. (cue quick chorus of “I’m stickin’ with you)

Over the course of the last few months Jon Sopel has been giving increasingly petulant sounding reports from the US. Before November, his love-struck eulogies to Hillary were the poems of a besotted groupie.

Now he’s calling Robin’s Donald Trump’s ‘Nigel would make a good ambassador‘ Tweet  an “intervention”. Did he call Barack Obama’s pro-Remain visit an intervention? I can’t remember, but all I can say is that the BBC has gone to town with this story and Theresa May’s terse reposte. 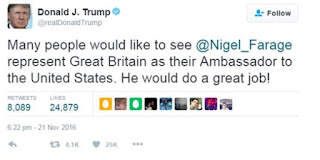 The BBC is very keen on the word ‘snub’, which they’ve been bandying about a lot.

Most (but not all) bloggers are mere bystanders and casual observers. My opinion is nothing special, be assured I don’t know any more about Nigel Farage’s suitability for any kind of diplomatic role than the next person. (I did see  a clip of the man himself saying he was not cut out for such a role)  But as a casual observer I would like to observe, casually, that Twitter seems to be taking on a function that is way above its pay grade. I do hope so. (Is the future of international relations going to a matter of 140 characters and some emojis? )

Also, Robin’s Donald’s Tweet seemed to me, as a casual observer, like a public expression of friendship intended more as a gesture of admiration than a serious political  ‘intervention’.
Theresa May’s irritable response also seemed unnecessarily snappy and lacking in wit. Boris should have intervened with something boyish and tousled.

People are muttering about Theresa May’s control freakishness. I wonder if she manages her own Twitter account.

I would like to congratulate Donald Trump on being elected the next President of the United States. Full statement: https://t.co/7W2feuodUE
— Theresa May (@theresa_may) November 9, 2016

(Whatever happened to Cliff Richard?)  (I'm not singing that)
Posted by sue at 12:25