Here's a flavour of what's happening on Twitter this morning...

First Guido Fawkes on the BBC and its Castro coverage:

And talking of Richard Gott, he was also on Today this morning:

And here's a similar take on the BBC's coverage to that of Guido's:

And as for 'the exception that proves the rule' at the BBC, well, here's Andrew Neil: 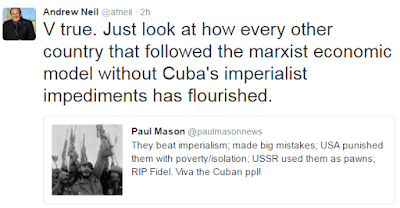 And finally, though non-BBC-related, here's something in a similar spirit: